Given that we're solidly into football season, we thought it was a good time to revisit this post by Katie from last year about stadium energy efficiency. Enjoy.

After recently attending a New England Patriot’s football game at Gillette Stadium in Foxboro, Massachusetts, I was overwhelmed by the size of both the structure and the population density served during the four plus hours that the game is taking place. The relatively new Gillette Stadium is also a completely open configuration located in a cold climate. Unsurprisingly, my thoughts immediately turned to energy consumption and sustainability.

Many Opportunities for Efficiency

There are many systems related to a stadium that can benefit from energy optimization: heating and cooling, ventilation, vehicle exhaust (garages), domestic water (plumbing), emergency power (generators), building automation systems, kitchens and, believe it or not, turf heating (just to name a few). So how much energy does a stadium actually use during peak hours?

One of the largest NFL stadiums is the AT&T stadium, home of the Dallas Cowboys. This is a fairly new stadium with a retractable roof which allows for temperature control during extreme warm or cold weather. An article in Wall Street Journal states that “during moments of peak demand on game day, the 80,000-seat stadium may consume up to 10 megawatts of electricity.” This equates to powering approximately 3,600 homes. And some college stadiums have an even larger capacity than an NFL stadium! However keep in mind that the Cowboys, like all NFL teams, only play games at their home field eight times per year during regular season. Here are a few measures that stadiums are implementing to help offset their footprint: 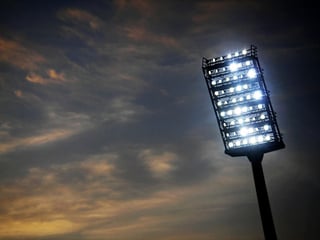 Although stadiums use large amounts of energy, there is a significant opportunity to make them more efficient and to take advantage of the periods when the structure is unoccupied. I know American Football will continue to attract large quantities of spectators and the necessity for larger stadiums will grow. I look forward to seeing how designers and engineers will change their approach to stadium design in order to effectively reduce energy consumption.

For further reading, I recommend checking out the this post blog by the Alliance to Save Energy, from 2014, which lists the top five energy efficient football stadiums, how they got there, and the reductions to their utility bills and carbon footprint.