With the growth of the Internet and our undeniable dependence on electronic data, comes the reality that data centers are estimated to consume 1.5% of the total world power – and this continues to rise rapidly. Large data centers are certainly the drivers behind these numbers, but most small companies have server rooms or small data centers that, collectively, contribute to a significant portion of this country’s costs and environmental footprint. Outside the IT opportunities of virtualization and server consolidation, there are few things the facilities department and management of a business can do to reduce this overhead and environmental cost. But as with many things, if we all do a small part it will end up making a big difference.

The Non-IT Side of Data Centers

According to the Small Business Administration's Office of Advocacy, small businesses (those with fewer than 500 employees) account for 99 percent of businesses in the United States. Many of these businesses require small to medium-sized server rooms. These rooms traditionally maintain a temperature of 68°- 72°F and often are a space retrofitted with a dedicated HVAC system. Until relatively recently, even large companies did not question the impacts these data centers have on their bottom line because it was seen as a necessary cost of doing business.

Since 2009, however, larger companies as well as academia and energy utilities have studied what opportunities exist to reduce this impact – with a focus, of course, first and foremost on maintaining the reliability of the servers themselves. The conclusions of these studies have created opportunities for energy savings for a range of data center types. I am going to focus on two areas where facilities and management staff can reduce the operating costs of existing rooms without upfront costs.

Servers utilize an internal fan to take in cool room air in the front and exhaust hot air out the back. This creates a difference between the inlet and outlet temperatures of the servers of 10°F or more. Hot spots at the outlet can be created if there is not enough air movement in the back of the servers to dissipate this heat. This is of great concern to the IT folks, as high temperature variability will lead to a reduction in server compute capacity and possible server failure. To reduce this temperature gain and allow efficient air movement, operators should provide ample uncluttered space in front and behind the server racks. Also, ensure the supply air is introduced in the front of the servers (i.e., place the supply diffuser or air conditioning unit in front of the servers) and ensure the return air duct is behind the servers. In the data center world this is known as a hot/ cold aisle layout. This recommendation may seem small, but it cannot be stressed enough how pivotal this is to creating an effectively cooled room, thereby minimizing server problems as well as enabling the next recommendation.

Over the past five years, data centers have “raised temperatures from 20°C (68°F) to 25°C (77°F) and found no measureable increase in server failure rate,” while saving 4% in energy costs for every degree increase in setpoint. Additionally, studies have found no evidence that older drives are more sensitive to higher temperatures (although it was noted that variability in temperatures – temperature swings - was found to cause equipment issues). In 2004, 2008 and again in 2011, the American Society for Heating Refrigerating and Air Conditioning Engineers (ASHRAE) studied data center environments. In 2011 ASHRAE published the ASHRAE Technical Committee 2011 9.9 Thermal Guidelines for Data Processing Environments in which data center room setpoints were republished from their 2008 guidelines: 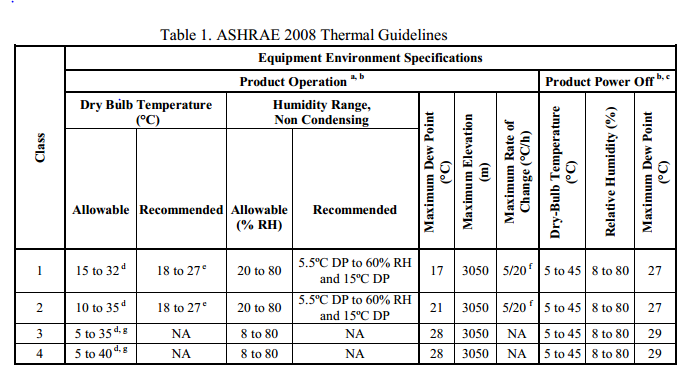 A number of large data center companies (Google, Microsoft, Intel, and Yahoo, among others) have actually increased their room temperatures higher than 80°F, but this is after conducting a detailed room air flow design study. I would not recommend increasing room setpoints above the ASHRAE guidelines (80.6°F) without such a study of your own data center. But there is now enough evidence that room temperatures in the mid to upper 70°s do not create server problems and can save 20-30% in reduced energy costs.

In summary, a properly configured room with a proper room setpoint can enable a small business to realize significant energy savings without endangering the functionality of mission-critical server equipment and without an expensive in-depth analysis of the optimization possibilities.