Over the last few months, Cx Associates has helped a number of schools throughout Vermont test their ventilation rates. As we’ve discussed in previous blog posts, providing adequate ventilation rates is an important part of providing good indoor air quality (IAQ), both during the pandemic and normal times. While most buildings were designed to meet a ventilation standard, there are numerous reasons why rooms may not meet the current ventilation recommendations. In most buildings, measuring airflow is really the only way to know that you meet the recommendation.

The first step is to establish the outside airflow rates for each space in the building. HVAC engineers do this using the ASHRAE Standard 62.1 for most commercial building space types like schools and offices. This standard is used as a recommendation in some cases; for example, it is referenced by the Vermont Agency of Education and Department of Health in their guidance for reopening schools. The ASHRAE 62.1 Standard is also required in some cases since many jurisdictions adopt it into their building codes by reference. The Standard has a lot of nuances and this blog post is not intended to be a comprehensive guide, but instead provides a high-level overview.

Zone Outdoor Airflow is a key part of the Standard. It is the amount of fresh outside air that needs to be brought into a space by the ventilation system. As you would imagine, the amount of fresh air needed depends on the size of the room, the activities in the space, and the number of people in the space. Below is ASHRAE 62.1 Equation 6-1, which calculates the amount of required to reach the breathing zone, followed by an example calculation. The factors Rp and Ra are listed in Table 6-1 and depend on the space type. For example, Rp is much higher for gyms (where people are breathing heavily) than libraries (where people are mostly sitting still).

Note that the airflow value above is called ‘breathing zone airflow.’ In the Standard, this value may be different from the Zone Outdoor Airflow (Voz), which is the amount of fresh air provided to the zone by the ventilation system. The reason they are different is a concept called ventilation effectiveness. If the fresh air is not well mixed with the room air, it is not effectively diluting pollutants. An example of this is when supply and return air are located on the ceiling and the supply air is much warmer than the room air. Research shows that the warm supply air (which is more buoyant) actually just floats along the ceiling and ‘short circuits,’ i.e. it goes right from the supply to the return diffuser without effectively mixing with the room air.

Example: For Classroom A (from previous example), Vbz is 271 CFM. Classroom A’s HVAC system has ceiling supply of warm air 15°F (8°C) or more above space temperature and ceiling return. According to Table 6-4, Ez is 0.8.

In the example above, Classroom A should have 339 CFM of outside air while occupied. If the HVAC system was a single-zone system with 100% outside air (no recirculated air), then the rate of outdoor air intake into the system would also be 339 CFM. If the HVAC system is multi-zone and recirculates air, then the amount of supply air to the room would be greater than 339 CFM (since not all of the supply air would be outside air; some fraction would be recirculated air). Note that this is not a comprehensive list of ASHRAE 62.1 requirements or formulas. For example, Section 6.2.4 provides further detail for multi-zone systems. There are also specific exhaust requirements for rooms like bathrooms.

The previous paragraphs were a long-winded primer on how we calculate the ventilation air requirements. In our work with schools, we perform the calculations above for each occupied space. Once we have our target ventilation rates, we actually take measurements to confirm the ventilation rates. The typical ways to measure airflow are with an airflow hood or a duct traverse. Airflow hoods work well to measure airflow from ceiling diffusers, i.e., the supply airflow rate to a particulate room. Duct traverses are used to measure the airflow inside a duct and are often used at the air handler to measure the outside air, return air, and supply air for the air handler system. 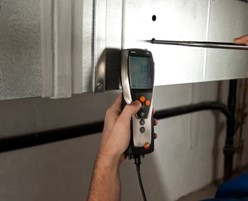 Ventilation Control Strategies During COVID-19: Why & How