Saving the Planet One Veggie Burger at a Time

Cx Associates’ work focuses on engineering services that save energy,

and thus doing our part to save the planet. All of us also have a strong personal commitment to living as sustainably as we can, recognizing that no one is perfect, and that we all do the best we can. Our employees walk or bike to work, take public transportation, compost, live in walkable neighborhoods, drive efficient cars, and recycle.

There’s one other very easy way that anyone who is interested in living sustainably can add to what they are already doing to further help the environment: eat less meat.

I’ve been a vegetarian for 26 years. I was originally turned off by meat after learning about the inhumane practices of factory farming. As I continued to learn more about what it takes to produce hamburgers, chicken breasts, and fish fillets, I was ever more assured of my choice to not eat meat – not only is meat-eating contributing to needless animal suffering, but it’s also killing the planet and is unsustainable.

One Simple Change for the Environment

If you can make one single change today that will have the biggest positive environmental impact, that change is to eat less meat.

After 26 years, I certainly do not miss meat. But I get it, giving up meat would be a big change for a lot of people. And people who live in food deserts – who are typically lower income and may not have the same resources as I – as well as people with certain dietary restrictions, may not be able to remove meat from their diets. But for many people, you can still make a difference with only a small change!

Eat meat one fewer days per week than you usually do.

Switching to vegetables one day per week cuts the equivalent of driving 1,160 miles per year.

“Well,” you might say, “What about locally and humanely raised meat? Doesn’t that solve the problem?”

While that’s probably true in that it’s better than factory-farmed meat, it’s still not as good as giving it up totally for a day. According to Carnegie Mellon researcher Christopher Weber, when it comes to red meat and dairy, “Shifting less than one day per weeks’ worth of calories from red meat and dairy products to chicken, fish, eggs, or a vegetable-based diet achieves more GHG reduction than buying all locally sourced food.”

Luckily, it’s never been easier to eat less meat! Meet the Impossible Burger. Founded in 2011 by scientist and researcher Dr. Patrick Brown with the mission to “drastically reduce humanity’s destructive impact on the global environment by completely replacing the use of animals as a food production technology,” Impossible Foods has created a plant-based burger that looks, feels, and tastes more like real meat. In this Medium post, Brown goes on to explain that “The destructive impact of animal agriculture on the global environment far exceeds that of any other technology on Earth. The greenhouse gas footprint of animal agriculture rivals that that of every car, truck, bus, ship, airplane, and rocket ship combined. Animal agriculture pollutes and consumes more water than any other industry.” 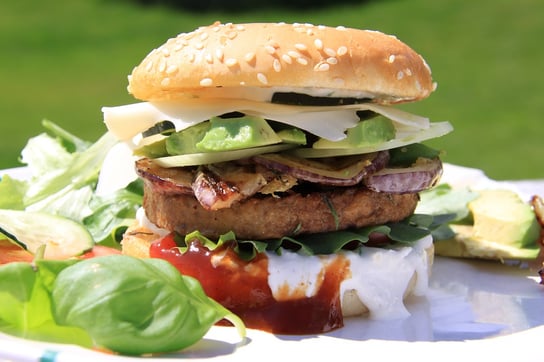 The Impossible Burger is scaling up. In fact, you can now find it on the menus of thousands of restaurants in the United States, including many White Castle and Burger King locations (as well as at some major league ballparks) – something that would have been unthinkable 26 years ago when I first gave up meat. And of course, there are now plenty of other meat alternatives for cooking at home.

You don’t have to quit eating meat completely! Just try eating less of it – you will be doing the earth a favor.

As Cx Associates' Director of Finance and Operations, Eric wears many hats - he creates and tracks budgets and projections, handles all receivables and payables, manages CxA's PM and bookkeeping platform, administers payroll and employee benefit programs, manages recruitment, and drafts cost estimates and proposals. Eric joined Cx Associates in 2009 as the Operations Manager, and in July 2020 was promoted to his current position. Prior to joining Cx Associates, Eric served for nearly a decade in the non-profit sector at several organizations in the DC and NYC areas. In 2014, Eric and his wife relocated to Chicago from Vermont. Eric continues to work remotely for Cx Associates.

It’s All in the Lighting: A Closer Look at the CRI Method