Chilled beams have been common in European building HVAC systems for decades, but they are just getting popular in the U.S.  These units fit in a drop ceiling or can be hung flush to the ceiling and contain a chilled/hot water coil and, in the case of active beams, a duct bringing in ventilation air. 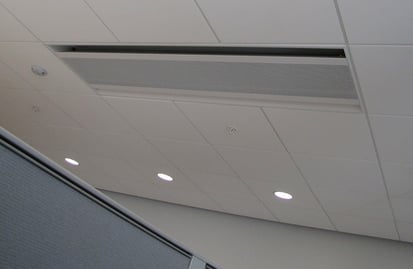 As the sensible cooling/heating is performed at the beam rather than at the air handler, the ductwork only needs to supply the makeup ventilation air (typically less than 50% of the total required air volume) that satisfies the latent load of the space.  This ductwork is therefore considerably smaller than a traditional VAV system.  Smaller ductwork and the anticipated energy savings are the two main reasons for the system’s rise in popularity.  The smaller ductwork is definitely a strong advantage as plenum space is a hot commodity, but Cx Associates has metered a number of these installations and we have been disappointed at the energy savings. In order to explain these results, I dove into the reasons for the disappointing outcomes we’ve encountered and found that lagging energy savings with chilled beams is actually being seen in by other engineers and building owners with these type of systems.

Figure 1 on the first page of Trane’s newsletter in the article, “Understanding Chilled Beam Systems” illustrate the difference between passive vs. active chilled beam systems.

Chilled beams use convective currents; room air rises, mixes with conditioned ventilation air in active chilled beams, and is then conditioned by the cooling/heating coil before dropping down into the space.  The active beams use a dedicated outdoor air system (DOAS) to supply the spaces with cool/dry air to satisfy the latent loads as well as the ventilation requirements.  The water coil in the chilled beam (a two pipe system for either cold or hot water or a four pipe system for simultaneous heating and cooling) is controlled by the space thermostat and satisfies the space sensible load.  The chilled water must be relatively warm (typically between 58°F and 60°F) to prevent condensation. 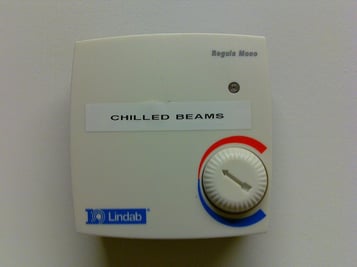 The majority of the operating hours of any cooling or heating system is spent at part load. In Vermont (Climate Zone 6A), 97% of our cooling hours are below the design conditions of 85°F drybulb/72°F wetbulb.   With a VAV system, the supply and return fans ramp down during part-load conditions and, thanks to the Affinity Laws, a small decrease in fan speed generates a large decrease in fan power (nearly a cubed relationship). VAV systems also benefit from load diversity - a building does not see design loads at the same time in all spaces. In contrast, chilled beams require the outdoor air handling unit to provide the design amount of ventilation loads of the space air during all occupied hours.  This reduces the number of hours that the DOAS can reduce its fan speed. In addition, due to the need to satisfy the latent loads, the DOAS cannot easily reduce its outside air volume through Demand Control Ventilation (DCV) during low occupancy periods. David Callan, senior vice president, director of sustainable design and high-performance building technology, Syska Hennessy Group, Chicago notes in this Buildings.com article, "these systems are better for projects where your air-conditioning system is sized based on heating and cooling loads rather than ventilation. If the ventilation system has to be so big that it could very easily handle heating and cooling simultaneously—meaning that you're not going to be able to reduce the size of the ventilation system - then it really doesn't pay.”  Savings calculations are frequently exaggerated if the baseline does not accurately account for the significant VAV fan power reduction of a system that can often operate at a reduced VAV fan speed.

Chilled water must be pumped throughout the building rather than only within the mechanical rooms.  In addition, with a warmer chilled water temperature requirement, a higher water flow rate (gpm) and/or more coil surface area is needed to provide the required cooling capacity.  This requires more pumping energy for a chilled beam system compared to a traditional VAV system.

VAV systems are not loved by all – they can suffer from poor air distribution and poor humidity control, are often not programmed properly, and require considerable plenum and shaft space.  Besides typically using smaller ductwork, chilled beams also use a more efficient energy medium – water rather than air.  That leaves good reason to design a chilled beam system, but carefully consider these challenges with chilled beams before specifying or installing them in your facility.

Construction of the 2016 Rio Olympics