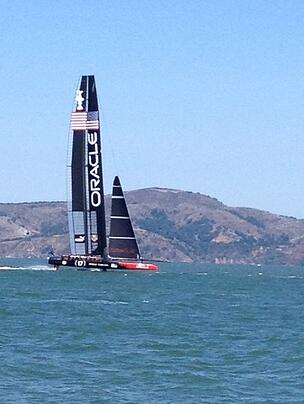 I’ve been drawn to the America’s Cup (AC) races in San Francisco by the excitement of watching the massive, wind powered boats achieving speeds over 50 mph in a 25 mph wind and getting faster on an almost daily basis. The technological advances that have been made in the interest of winning a yacht racing cup are astounding. Many have complained about the prohibitive cost of these boats and early on there was a big sense that the event had been oversold as it appeared New Zealand was about to handily defeat the Oracle USA boat. But the US boat and crew improved at an astounding rate and as they won race after race, keeping the Kiwis from sealing the deal, people began flocking to watch.

Because there was a singular goal and a set of specs required for AC competitors, the engineering teams associated with these boats were forced to innovate. The innovations continued as the closely competitive races clearly demonstrated when a boat had a speed edge. We’ve seen a couple of examples where specific requirements have driven innovations in energy efficiency. In the late 1990s HUD issued an RFP for a cost effective, highly efficient, apartment-sized refrigerator. Manufacturers responded and produced an affordable efficient refrigerator that changed the market at the time. California’s aggressive energy codes drive manufacturers to develop products that will help building designers meet ever more rigorous energy standards in the large CA construction market. Building energy benchmarking laws are showing building owners how they compare to the competition. While no massive silver cup hangs in the balance, even seeing your position relative to your competitors drives change. We need to develop more competition around efficiency; the goal should be to drive the energy use of our building stock to the lowest possible point so that we can meet our loads with renewable energy.

The thing about innovation is it is non-linear and not all innovations work. Early on in the races, Oracle made some changes that actually seemed to slow the boat down. In energy efficiency, an example of a problematic innovation is the compact fluorescent light (CFL) bulb, which was developed to help building designers meet code requirements. CFLs were initially applied in the commercial market where designers understood the limitations of the product. When CFLs made the leap to the residential market and tried to replace incandescent light bulbs, there was a massive failure. Poor color, delayed starts, flicker and other problems dogged CFLs. One issue with this type of failure is that it was diffused across a broad market and most people simply threw failed bulbs away and went back to what they knew worked. We need to find a way to make energy efficient product failures as visible as a speed deficiency tacking up wind in the America’s Cup. When a CFL fails prematurely in my home (which happens regularly) I simply recycle it and there is no feedback to the industry that a name brand product for which an incentive is provided is not living up to its claims. Innovation doesn’t happen without a feedback loop.

At the recent IEPEC conference a presenter spoke of his frustration at not being able to move a simple product (a relay that controls the fans on packaged air conditioning units), which he has proven will save energy. He has been trying to bring this product to market for years. Someone at the conference mentioned that this same engineer had been a big proponent of an HVAC tune-up program which had failed to deliver the promised savings. Innovation is tough, if people bank on it and it doesn’t meet expectations they are reluctant to dive in again. New Zealand is reeling from their America’s Cup loss and unwilling to commit to a future challenge. We need to find ways to foster innovation while providing protection for early adopters.

Understanding markets is what I was originally planning to blog about. Larry Ellison’s team presumed because the boats were exciting and accessible, people would want to watch. But it wasn’t until the competition lost its air of inevitability that huge crowds of people were drawn to the drama of the race. If the Kiwis had continued on and won a 9th race early in the series the AC regatta would have been seen as a disappointment instead of the successful event it turned out to be.

We constantly struggle with how to move the market to adopt energy efficiency, which may be even harder than getting people to go stand on the shore of the San Francisco Bay and watch unbelievably fast sail boats. Energy efficiency isn’t sexy, it’s not cool and it’s hard to recognize. Our industry is constantly striving to find the non-energy benefits that will make people want the more efficient option. In the commercial building arena benchmarking and disclosure laws are a means to making building energy efficiency recognizable. Some rating systems seek to score buildings based on their construction but this doesn’t account for the fact that actual consumption varies greatly from modeled usage. Using actual building miles per gallon is a little like the velocity made good (VMG) score of the AC yachts. It shows how well buildings are actually performing and can enable building owners to set and achieve energy performance targets.

Changing people is one of the most difficult aspects of the energy efficiency work I do. How do we get the building operator to accept more efficient control strategies instead of manual operation? How do we drive the market to demand more efficient buildings? If the buildings were racing toward a mark or a finish line of any sort, it could be an engaging sport, but they are static consumers, often barely meeting the needs of their occupants.

We need to innovate new ways to drive efficiency into the market. We need to stop letting manufacturers and lighting designers set code. We need to set clear goals and support those who are willing and able to innovate to achieve them. We have a long way to go. In fact I think it is 8 – 1 against the planet and unless we can turn things around, there will be no Oracle USA comeback for us.