Basics of steam coil and face and bypass operation

Many air handling units in colder climates are equipped with steam heating coils. These coils use control valves to modulate the flow of steam to the coil. Due to the low mass of water in a steam coil, it has a higher propensity to freezing when conditions are right. One of the neat ways we’ve design around this is to use a Face and Bypass (F&B) damper arrangement to allow the coil to have maximum steam flow to prevent freezing. The F&B dampers direct a portion of the airflow through the steam coil and another portion bypasses the coil in order to achieve the necessary discharge air temperature and prevent a freezing airstream from damaging the steam coil. Pretty neat, huh?

The issue that was resolved with the use of the F&B damper arrangement is to prevent the coil from freezing, so anytime the coil isn’t at risk of freezing the face and bypass dampers will open to allow full airflow through the steam coil and the steam coil control valve will modulate to maintain the discharge air temperature. This is nothing novel, most hydronic or steam coils use the same controls. How do we optimize the switchover point for steam coil valve modulation to F&B damper modulation? Well if the end goal is to avoid freezing the steam coil, we should switch over when its freezing out of course!

Face and Bypass changeover: The Issue

Right, its freezing outside and the AHU is pulling in all his freezing air, so let’s start using the F&B dampers to control the heating output. Well, in a 100% outside air unit with no return air you’d be right (and can ignore the remainder of the article), but for the 90% of air handling units that have return air, you might find yourself with an issue. This issue usually manifests as over-shooting the discharge air temperature setpoint, over-heating the spaces, or (gasp!) having to open the cooling coil valve or engaging a DX coil at the same time the steam coil is open. Now that is not optimal!

What is the big deal, I thought the F&B dampers would bypass the air if the DAT is above the DAT setpoint? You are right, but what about that steam coil? The steam coil is probably cranked open to 90%-100%. That thing is blowing enough steam through it to bring a mix of return air and -7F outdoor air (ASHRAE 99% design condition if you’re in Burlington, VT) up to a nice DAT of probably 50-85F depending on the system. That is no small amount of energy! Even with the F&B dampers directing the airflow to bypass the steam coil, the steam coil is still located in the air handling unit and all the heat that the steam coil is putting out with it’s valve wide open has to go somewhere and it ends up in the airstream.

Let's look at an example: say we have an air handler that supplies 2,000 CFM, and its returning 1,200 CFM, bringing a minimum 800 CFM outdoor air. The return air temperature is 65F and the outdoor air temperature is 32F results in a mixed air temperature of about 52F. If the system is serving VAV terminal units, the DAT setpoint might be as low as 55F. If the unit does not have any further reheat downstream the DAT setpoint might higher, somewhere around 75F or higher. All that heat from the steam coil finds its way into the airstream, bringing the mixed air temperature from 52F to maybe as high as 73F! This can cause the unit to enter cooling mode, which might try to economize, or kick on mechanical cooling through a cooling coil or DX coil.

Face and Bypass changeover: The Solution 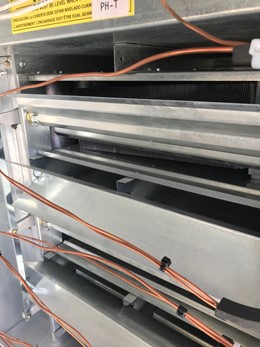 As an additional safety measure, we recommend the installation of a steam condensate temperature sensor near the condensate disposal line leaving the steam heating coil. This can be used as an additional low-limit thermometer to alarm the facilities workstation. In the event the condensate reaches about 50F, you can get a warning that the steam coil is getting too cold before the coil freezes.

Ventilation During COVID-19: Why & How