After an early morning departure and a snowy drive, my colleague and I arrived onsite to test, among other equipment, a packaged rooftop air handling unit with factory controls. At first, the unit appeared to check all our boxes, but as we dug into the details, it became clear that this would be a very expensive heating system to operate. This blog entry is about factory controls and the importance of getting into the weeds to identify issues like the one we found with this rooftop air handling unit.

The packaged rooftop unit provided heating, cooling, and ventilation air to a large portion of a brand-new performing arts building. By the numbers alone, it was a very efficient unit. It had a high efficiency modulating heat pump, an energy recovery wheel, demand controlled ventilation (via a CO2 sensor in the space), an economizer, and variable speed fans. It also had back-up electric resistance heat.

The sequence of operations in the design documents was high-level. This is pretty typical when factory controls are used, because each manufacturer has different control capabilities, nomenclature, etc. Rather than write a sequence that is overly prescriptive, we often see statements like “the unit shall be controlled by factory controls to maintain the required space temperature and humidity levels”. Luckily, this sequence had a bit more detail and included the requirement that the heat pump be the first stage of heat. 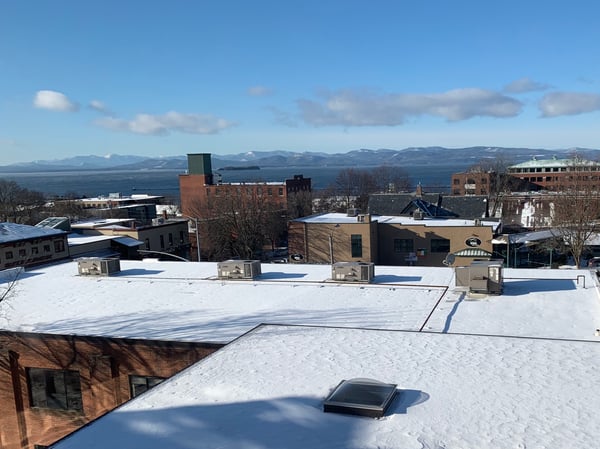 Rooftop units like these often have factory controls. Users have limited visibility into how the unit actually controls.

One challenge with factory controls is that it is difficult to determine exactly how it is being controlled. Building automation systems (BAS) allow us to view control logic and understand

why equipment operates in a particular way. Factory controllers, on the other hand, can feel like a black box; we don’t see the logic inside, we just see the end results. At a high level, this unit seemed to do what it was supposed to. It was winter and the unit was maintaining the space within a four-degree band around 72°F. It was ventilating the space and keeping CO2 at reasonable levels. To the occupants and most building owners, the unit was operating as intended.

We started noticing issues when we tested the staging of the unit. When the zone temperature dropped, the unit switched to heating mode. But instead of using the heat pump (it was about 30°F outside, well within the operating range of the heat pump), the electric resistance heat kicked on. Soon after, the heat pump turned on and both stages of heat ramped up to 100% output. After some investigating, it turned out that the discharge temperature reset (which was part of the sequence of operations) had not been configured. Instead, the unit effectively had two heating states. When zone temperature was satisfied, the discharge air temperature setpoint (DAT SP) was low and the heat turned off. Then, when the zone temperature dropped, the unit switched to heat mode, the discharge air temperature setpoint immediately increased to 85°F. The unit heated for about 25 minutes, then both stages of heat turned off for a couple hours.

If the unit gradually reset the DAT SP, the heat pump would have been able to module to maintain space temperature setpoint without using any electric resistance heat on most winter days. This may seem trivial, but it’s important to remember that electric resistance uses about three times more electricity than the heat pump. Though this was a relatively small building, the electric resistance heating element was 36 kW, roughly equal to the average power draw of 30 houses. Moreover, the building owner had already paid for the heat pump, modulating control, and many other advanced features on this unit. And aside from the energy efficiency issue, this unit also had a comfort issue; occupants would be subjected to discharge air temperature cycles of 60°F to 85°F, rather than the near constant temperature that modulating control could provide.

Unfortunately, this type of problem is widespread. There are many reasons we should expect factory controls to work efficiently out of the box: equipment is regulated by energy efficiency codes, equipment is manufactured with advanced control capabilities, and everyone working on the project recognizes the importance of energy efficiency. But one seemingly minor parameter can throw all the energy savings out the window. It’s a good reminder to commission your equipment, even if it has “factory controls,” and remember to get into the weeds.