A Long Wind on Long Tailpipes

My wife and I have committed to no longer buying combustion engines of any type. This commitment is not easy. It’s not fun either. It is, however, getting easier as time goes on. A recent challenge we faced with this commitment occurred when we realized we needed a new lawn mower. Just try buying an electric lawn mower – not only are their price tags still very much above that of their gasoline-loving counterparts, but you may also pay a hefty price arguing with your spouse about it.

Today, it is far easier and cheaper to just give in and keep on burning gas. Even my most eco-minded friends still choose to burn gas over choosing the more difficult path of finding alternatives. Together, our economy and the convenience of the American lifestyle have made avoiding fossil fuels challenging and something that most are unwilling to be inconvenienced by. Don’t get me wrong, I live in this glass house too and my intention is not to throw stones. You can shame me while I mow my lawn.

A few months back, Tesla unveiled its newest car, the Model Y. I think this is pretty cool, but I won’t take up your time explaining all the reasons why. One thing that the Tesla brand seems to have, besides paradigm-shifting automobiles, is a spotlight. They attract attention, negativity, bad press, good press, haters, and lovers. They are as polarizing as a neodymium magnet. I admire their ability to stick to their guns, not only by disrupting a very large auto industry but by pulling it drastically toward electrification. Before Tesla, the industry considered hybrids to be the best cars for the environment and the future.

The move toward electrification is obvious, yet it has friction. Those who benefit from the status quo are pushing misinformation out into the world and trying to attach it to Tesla’s brand as well as to battery electric vehicles (BEVs) in general. There is one constant argument I continue to see and hear from friends, family, and neighbors, which to me indicates that it is effective in its propagation. The argument I’m referring to has been called the “long tailpipe” argument, and it goes something like this: 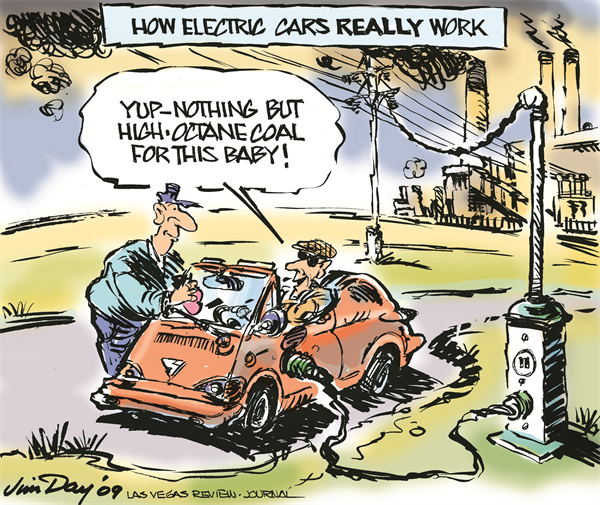 Like many jokes, there is a grain of truth behind the comics above, I’ll give them that. However, this argument is a hasty generalization, and I feel the need to poke at its ridiculousness for a moment. These comics point out that the electricity used to power electric cars often comes from fossil fuel power plants. This is true for a large portion of the United States along with many other industrialized nations. That being said, the long tailpipe argument can be defeated with thoughtful comparison to gasoline/diesel generation and transmission. I plan to use the 21st-century method of “oversimplified, terribly drawn internet comics” to help illustrate my point.

The first counter-argument to the long tailpipe has to do with the energy mix available in an area. Some parts of the country generate the majority of their electricity with fossil fuels, but this is changing as the renewable energy market continues to undercut fossil fuels around the nation (yay!). Unfortunately, as I write this today, most of the country is still dependent on a mix of various forms of carbon-emitting power generation, thus lending the grain of truth to the picture in figure two.

Energy mix aside, let us compare figure two to powering your car with gasoline or diesel. Since diesel will play a large part in this discussion, I want to first call out that every gallon of diesel fuel burned creates 23 lbs of atmospheric CO2 (among other gaseous nasties you can look into later). Remember that as we move forward.

Let’s break this out into three simple and distinct areas of comparison:

1. Source of the Fuel

For most of us, this is gasoline. Gasoline comes from oil, which means we must start with oil. You may or may not know that oil comes from underground, hard to reach places called petroleum reservoirs. To get this oil into the energy market, a corporation first needs to drill and then pump it from these underground reservoirs. When extracted from beneath the ocean floor, that can look something like this… 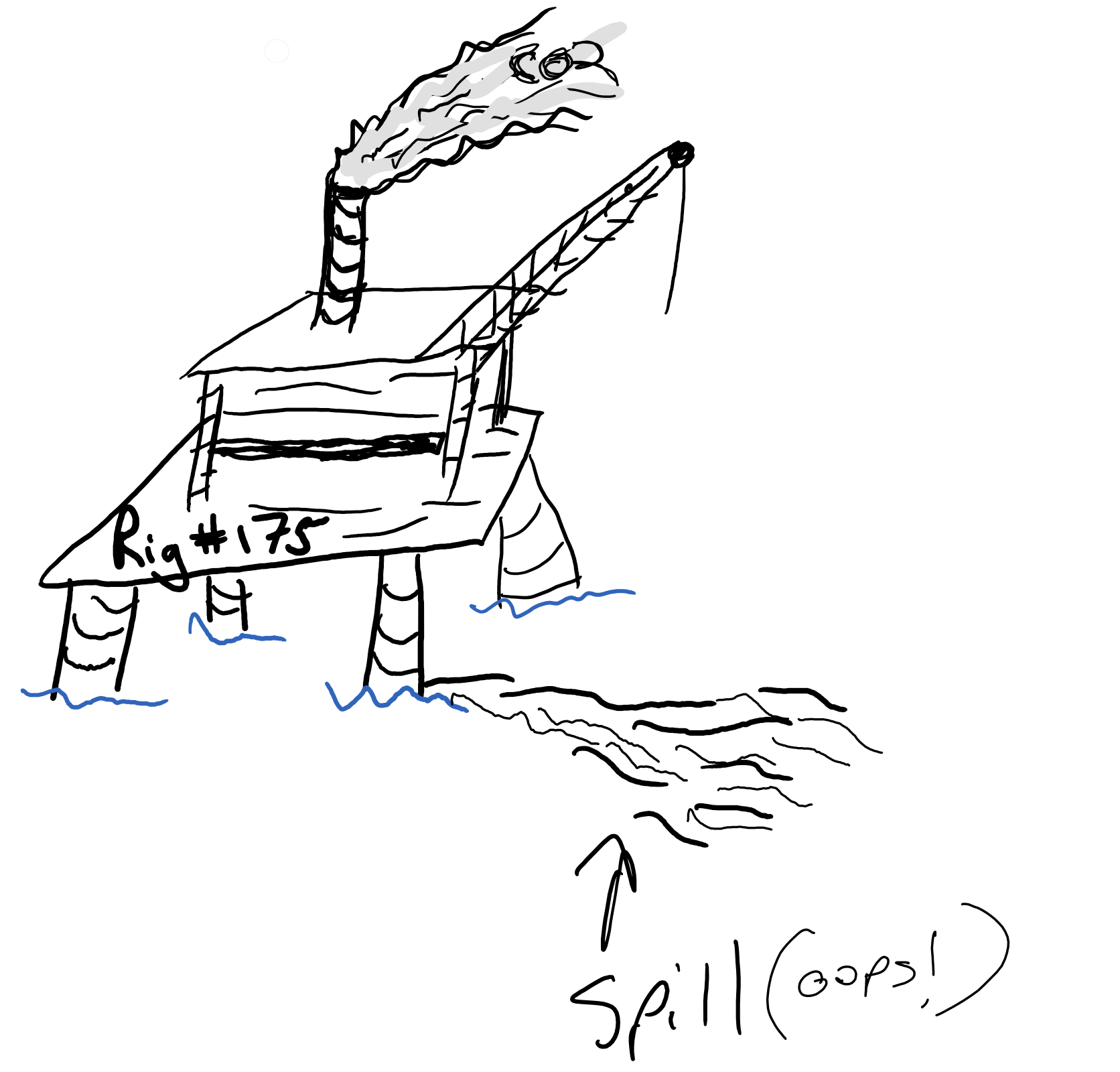 Let’s ignore that spill since those really aren't common. They’re super rare, and most happened a long, long, long time ago. I mean, was I even driving a car in July of 2019? I can’t remember. It wasn’t that big anyway. They cleaned it all up and no harm was done, right? Plus, electricity spills are way more common.

Now let’s move on to the second area of comparison: Transportation.

2. Transportation of the Fuel

We quickly move from the drilling rig to this: 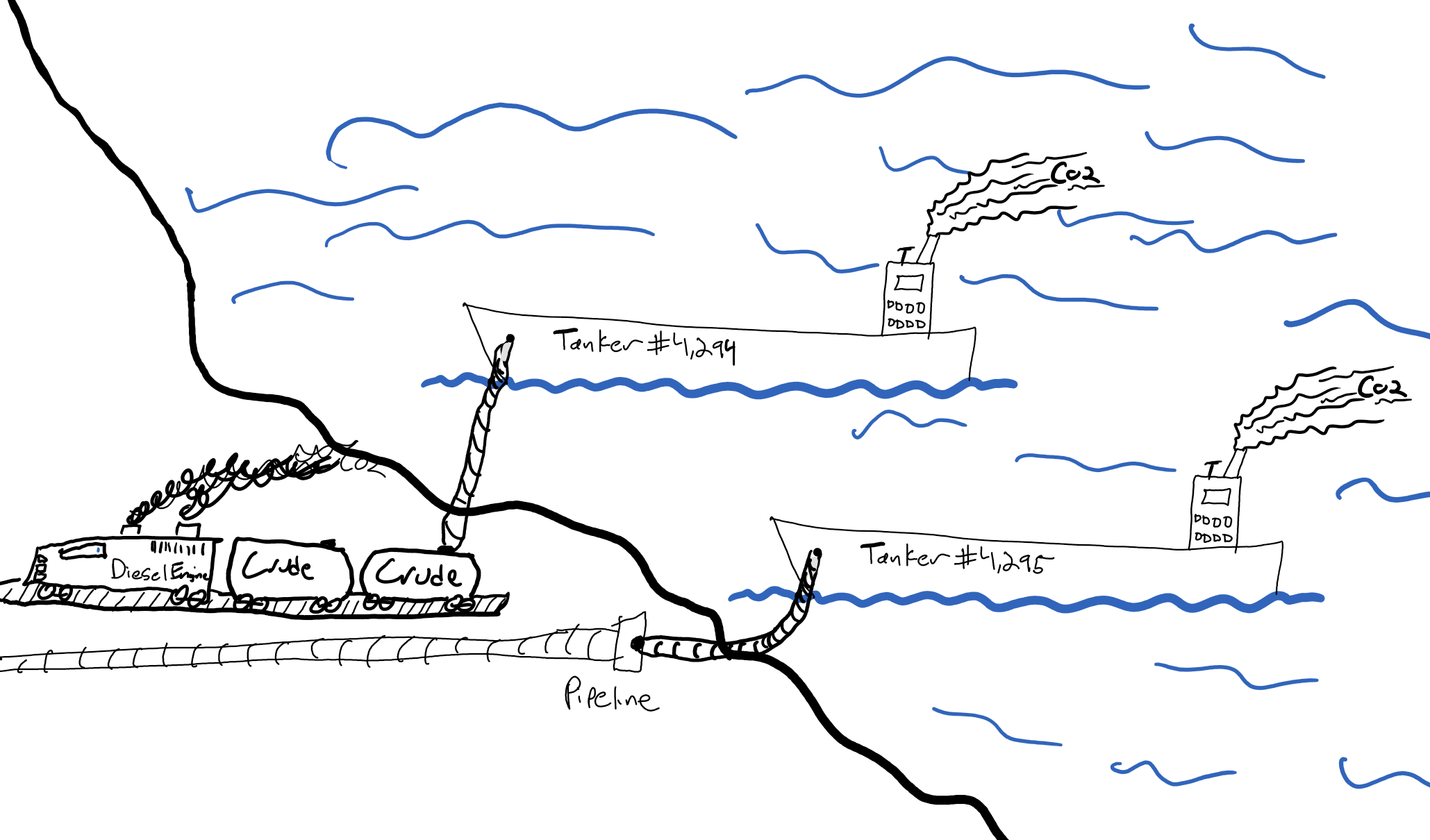 The point here is that we burn fossil fuels to obtain and transport fossil fuels. We burn a lot of them. Tanker fuel consumption is not measured in gallons/nautical mile but in hundreds of tons/day. Remember, every gallon of diesel fuel burned creates 23 lbs of atmospheric CO2. 1 gallon of diesel fuel weighs 6.943 lbs. So, for 2,000 lbs (equivalent to 1 US ton) that’s 288 gallons.

Once a tanker brings the oil back to land, either a train or pipeline picks it up. According to CSX, a typical train is capable of hauling 3,000 tons of freight 500 miles, while consuming approximately 3,185 gallons of diesel fuel. You do the math this time. By the way, trains are much more energy-efficient than semi-trucks on the highway – we’ll get to that in a minute though. Unlike high voltage transmission lines, pipelines also have their issues, largely with spills.

Now, keep in mind, our main focus here is cars that use gasoline. Gasoline doesn’t come straight from the ground. We must convert the crude oil, transported by tanker and train, to gasoline. We must refine it. Guess what we use for the primary source of energy there…

Once the crude oil has been converted into gasoline/diesel, it’s transported to the customer. Is this done by a nationwide network of pipelines that branch directly to every gas station in the country (like a network of electrical transmission lines)? Nope, we continue burning more fossil fuel:

We move the fuel from the refineries, store it, then transport it all across the country to other various storage facilities where distributors load it back on diesel trucks and deliver it to your local gas station. Finally, you drive to your gas station (burning fossil fuel) to get more fuel.

The average tractor trailer semi-truck (2.8 million of them registered in the US as of 2016[1]) gets something to the tune of six miles per gallon of diesel. Every gallon of diesel fuel burned creates 23 lbs of CO2. We’re burning diesel to transport diesel to allow more diesel and gas to be transported to gas stations. Sounds efficient, right?

Ask yourself, how much fuel was burned to get the fuel to this point here? 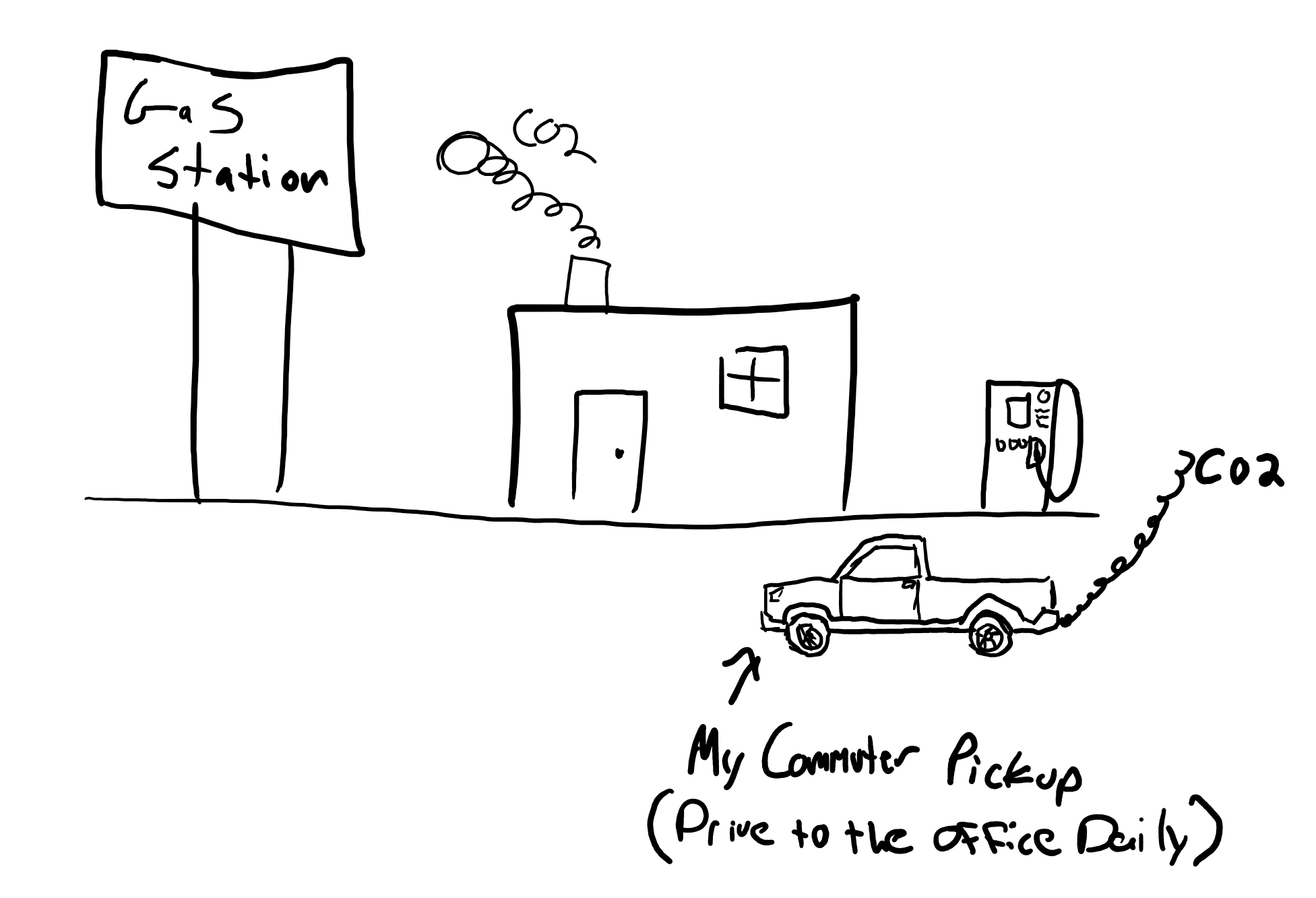 Even if that power plant in the background is 100% coal, consider how much CO2 is used to deliver the electricity to the BEV. To be fair, some of the electricity is lost to the resistance of the wires, as heat, and through transformers in the electric grid. According to the US Energy Information Administration (EIA), about 5% of the electricity is lost due to transmission – of course, this varies from state to state. But, take a step back and look at the losses in getting crude oil from the ground to the gas station. Doesn't that seem like more than a 5% loss in energy? 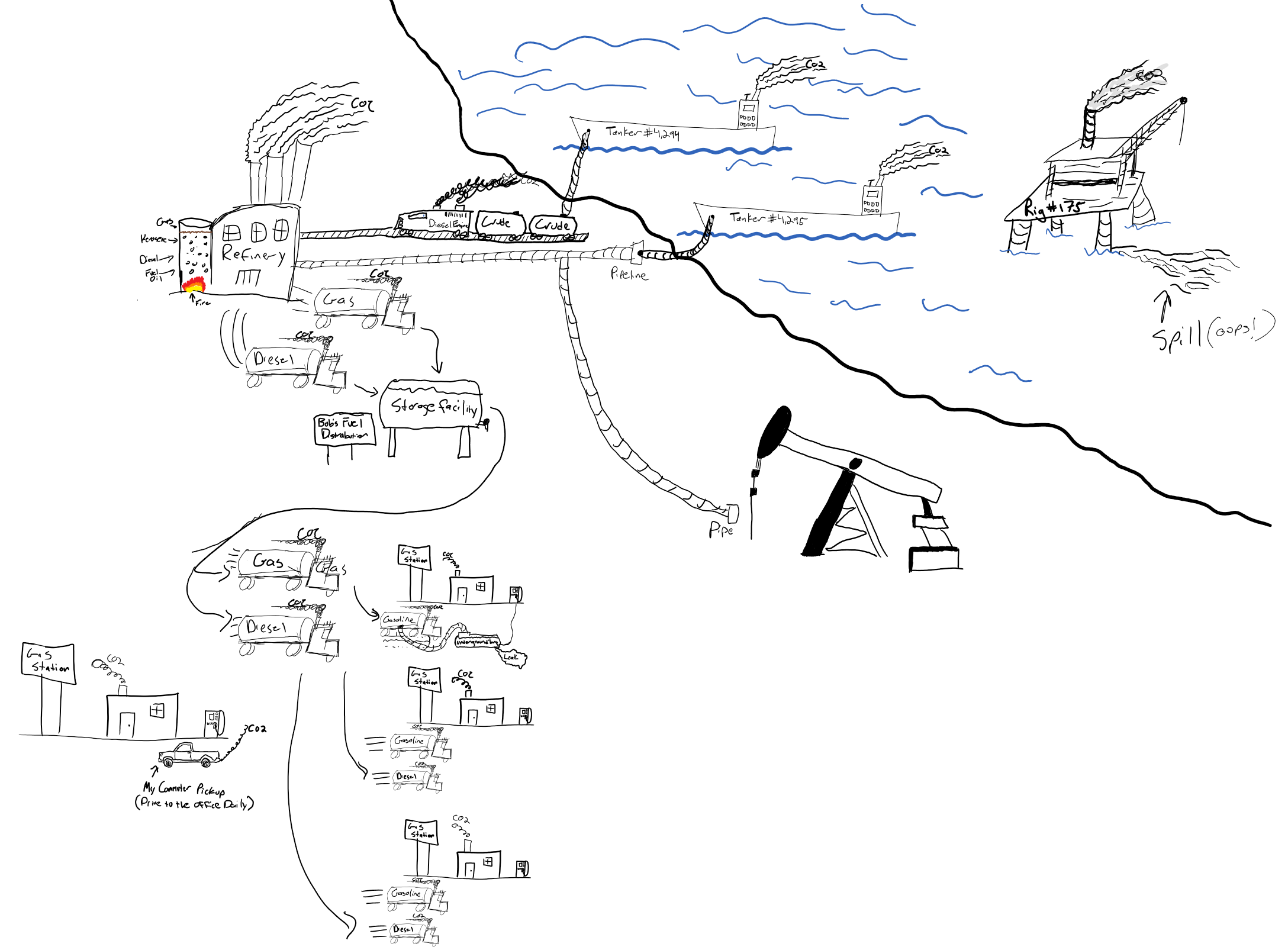 Have you ever heard a semi-truck engine brake through your neighborhood? Think about that…ENGINE BRAKE! Burning fuel to slow your semi down because your semi burned more fuel than it needed to get up to speed. You’ve heard the sound. Think about the CO2 next time you hear it.

Have you ever sat at a stoplight and watched your tachometer as your engine idles? In these moments, you’re burning fuel just to keep your engine running. That’s why idle stop systems are becoming standard.

A battery electric vehicle, on the other hand, doesn’t create emissions of any sort. They don’t idle, they utilize regenerative braking and they are completely silent.

Now let’s look at the apples next to the apples, so you can come to your own conclusion while taking into consideration the fact that, I am oversimplifying and using heavy snark to make a point. 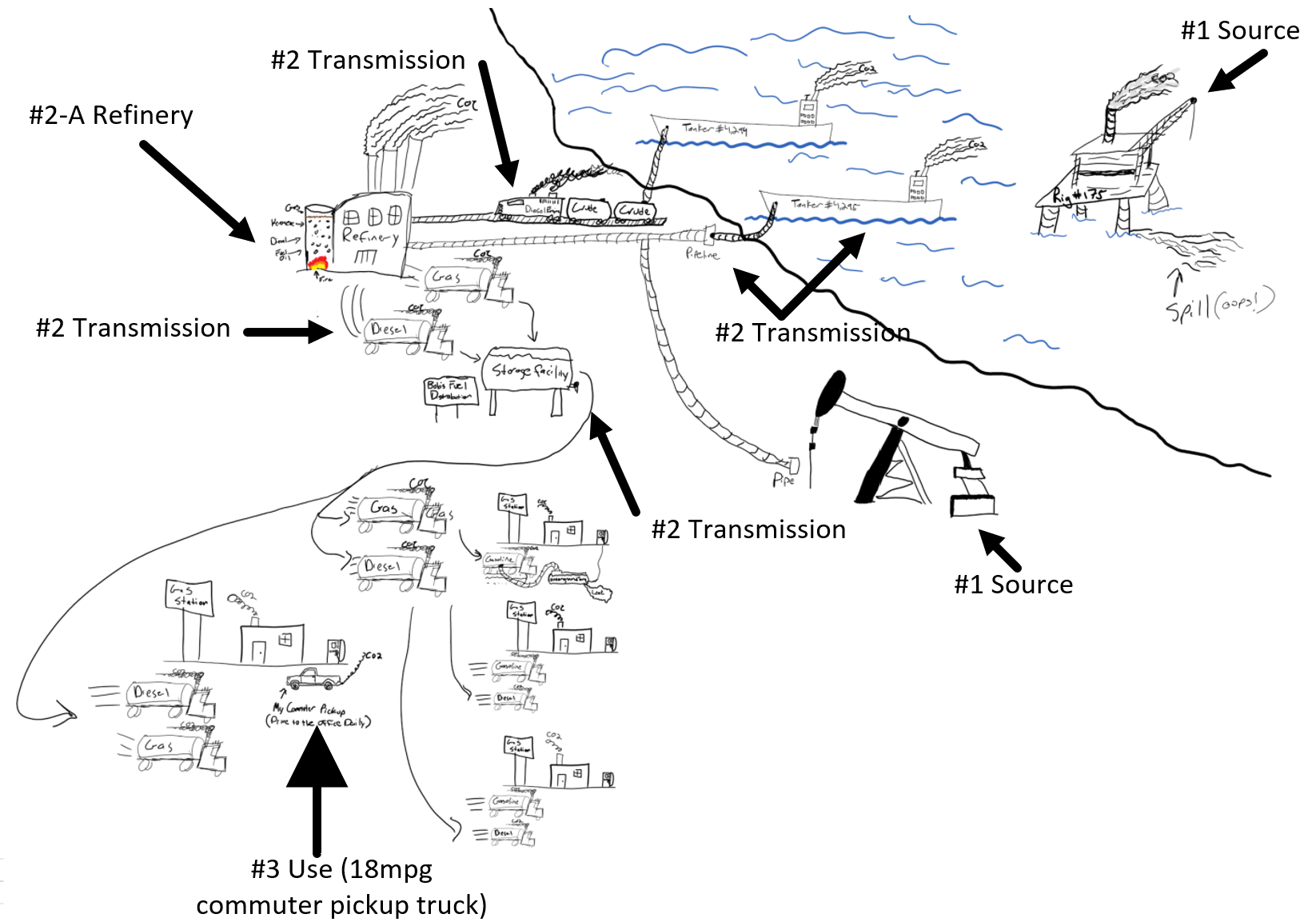 My Personal Conclusion: When you really look around at the American infrastructure, the “long tailpipe” argument looks pretty silly and really should not be promoted further.

Resiliency in the Future Workforce: What Traits Will We Need?