Did you know that buildings and the electricity/heat production to power those buildings are responsible for over 30% of global greenhouse gas (GHG) emissions (as of 2014)? Did you also know that as of 2012, about half of all commercial buildings in the United States were constructed before 1980, nearly ten years before the idea of climate change first became major news? With such a large portion of the building stock still existing from before anyone cared or even knew about the effects low efficiency buildings would have on the planet, engineers who know how to take that building stock and bring it up to date are more important than ever. I’d always known that buildings have an effect on GHG emissions, but had never thought about what industries may exist that were actually making a viable difference. Cue my journey to Cx Associates.

My time so far at Cx Associates (about 6 months) has opened my eyes to the power of engineering in the fight against climate change. I’m not advocating we forgo the efforts being made to change climate action policy, but without a major shift in policy that dictates the demolition of existing buildings in exchange for net zero or carbon negative new construction, it’s up to people like those who work here to find creative solutions to make buildings that exist or that are being newly built as efficient as possible. By optimizing equipment and their corresponding systems in buildings, we can reduce GHG emissions. Take, for example, an update to occupancy schedules for supply air VAV boxes we provided at the University of Vermont Medical Center Ambulatory Care Center (UVMMC ACC). By revising the sequence of operations on ~50% of them to go into unoccupied mode when not in use, we were able to not only save energy in the VAV boxes themselves, but the corresponding Air Handling Unit fan as well.

Saving Energy for the Planet and the Bottom Line

Some building owners may worry more about bottom line than about climate change, but the benefits of energy efficiency extend to monetary savings. If a measure were implemented to save just 100 kWh/year (which is nearly nothing considering the average American household consumes 867kWh/month), which comes out to about $12.50/year, it would save 156 pounds of CO2, equivalent to the amount of GHGs released by a car driving 173 miles. Increase this to the kWh we can save building owners through measures implemented, and a picture begins to form of how widespread implementation of building system optimization can actually make a splash in the bucket of U.S. energy consumption. If, for example, you take the UVMMC ACC project I outlined, the results speak for themselves – we verified annual savings of the equivalent of 894,007 kWh, saving the customer about $111,750/year ($154,300 if using New England electricity costs), equivalent to driving a passenger vehicle 1.55 million miles. 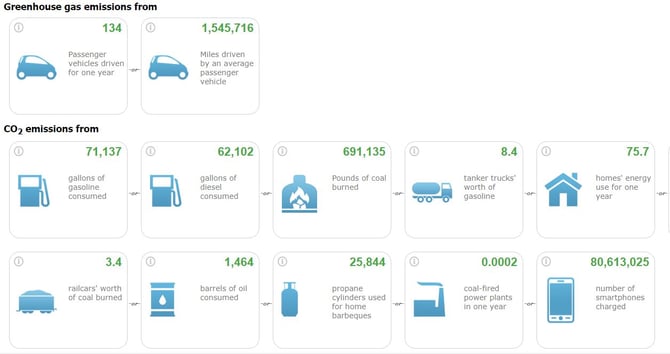 If you are interested in learning more about U.S. energy consumption, there is some fantastic data to be mined from the U.S. Energy Information Administration. If you’d like to find out more about the GHGs produced by your building, check out this Greenhouse Gas Equivalencies Calculator. If those things inspire you to take on some energy efficiency projects, you know where to find us.