When it comes to enjoying the many positive features of an enclosed parking garage, most users will not think about the type of ventilation system in place. But an enclosed parking garage poses an issue with carbon monoxide (CO), a very harmful toxic gas that is created when “fuels burn incompletely – most vehicles have an internal combustion engine where this occurs”[1]. Known as a “silent killer,” CO has no odor or color, but can very quickly poison a person before they even sense anything is wrong. Because of this risk, it’s especially important to make sure there is a proper ventilation system in any enclosed area where there is a potential for formation of CO. In this blog post, I will discuss the pros and cons of two current system designs that are typically used. 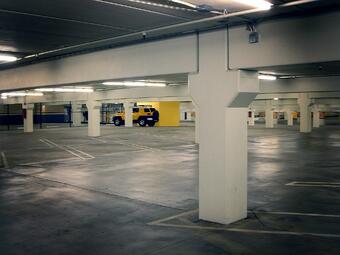 When an engineer designs a ventilation system for an enclosed garage, they carefully calculate how much CFM is required based on square footage and quantity of operating vehicles. Depending on climate and location, the applicable standard/code for ventilation must be carefully followed to ensure the minimum requirements are met. 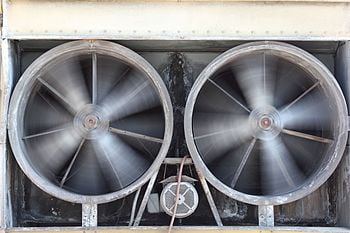 Importance of Testing & Monitoring these Systems

Similar to all systems with automatic feedback, it is especially important to monitor and test a garage ventilation system that has sensors. The CO sensors can go out of calibration, rendering the system ineffective and cause a harmful environment for occupants. Additionally, some sensors can’t read CO levels below a certain temperature. If a garage ventilation system is designed in a colder climate, there should be a built-in response to low temperatures that will override the exhaust fan to run at constant speed if the sensors are limited.

I was recently in an enclosed garage that was constructed in two different phases over a two year period. The ventilation system for the phase 1 garage consists of an exhaust fan that operates at a constant volume 24/7. The phase 2 garage has a more complex system that consists of an exhaust fan with a variable speed drive (VFD) connected to CO sensors throughout the space. This fan is set to run 24/7, but the speed varies based on the level of CO. Our recommendation is to change the phase 1 garage to have a ventilation system similar to the phase 2 garage. This 2 HP fan could conservatively reduce its annual consumption by 50%; saving an average of $1,200 per year and generating a simple payback of 3.5 years. Depending on the operator of these systems, one could be a better fit for certain garages. A ventilation system with a variable speed exhaust fan and sensors may lower energy costs for an owner but does require more maintenance and monitoring to ensure it is working correctly. If a garage does not have maintenance staff that can monitor the functionality of the fans as they are on the premises, careful consideration needs to be given to the applicability of variable speed fans. [1] http://www.abe.iastate.edu/extension-and-outreach/carbon-monoxide-poisoning-garages-aen-207/

On Building Commissioning, Quality and the Software Industry