We often write about retrocommissioning of existing buildings in this blog and the benefits to the building owners. To put this in context, I thought I would highlight a recent success story. The following project was the retrocommissioning of an existing four-story 100-year-old building. The building houses retail space on the bottom floor and office space on the upper floors. The measures were driven by comfort issues, control issues and an astute building owner who acted on the utility’s audit of opportunities. After two months of monitoring, this HVAC system’s consumption is showing savings of 80% and payback of the project is approximately 2.5 years. Here are the key elements of this retrocommissioning project.

The building has a main heat pump loop which supplies heated/cooled water to the terminal heat pumps in the tenant spaces. The central plant has a cooling tower and natural gas boiler conditioning the building water supply. Prior to this project, the pumps for the building loop and the cooling tower were constant speed, with the 20 HP building loop pump operating 24/7 at this speed. The DDC controls were failing too and equipment was not properly controlled (water temperature or cooling tower operation). In addition, the combustion air ducts did not have dampers, meaning that unconditioned air was entering the building 24/7 when it is only needed approximately one third of the year when the boilers operate. Lastly, a manual valve in the main supply pipe was partially closed (increasing the pressure at the pumps greatly) in order to divert water into the boilers. Water was being pumped through the boilers whether they were operating or not. 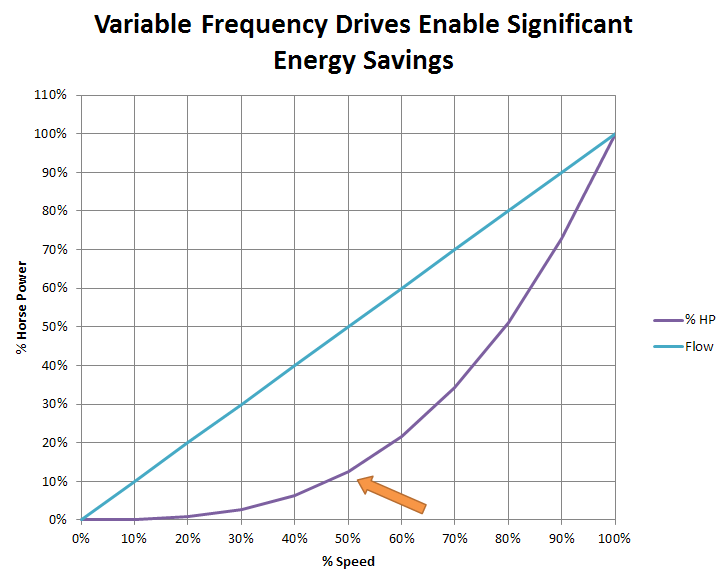 Half volume (or flow) can be achieved at half speed using nearly 1/8 of the energy (HP).

The retrocommissioning project installed variable speed drives on the building loop and cooling tower pumps, installed combustion air dampers, removed the manual valve in the main line, installed a circulating pump in the boiler piping, and replaced the failing DDC system. The main building loop is now controlled by a differential pressure sensor in a remote location in the piping and the cooling tower pumps are controlled on return water temperature.

The rooftop HVAC units are older, but well maintained and it was not cost-effective to replace them with more efficient units. So we analyzed the units’ controls and found savings ready for the taking. The outside air temperature sensors were far out of calibration. As these sensors control every portion of the HVAC equipment (economizer, damper positions, heating and cooling modes), accuracy is critical to efficiency as well as comfort. In addition, the static pressure sensor was found to be out of calibration by 30%, some VAV boxes were supplying 50% more air than required and there was no static pressure reset sequence. Supply pressure in the ductwork upstream of the VAV boxes was found to be adequate and the economizer worked well when the outside air temperature sensor was reading correctly. This project recalibrated the sensors and programmed a static pressure sequence. These HVAC units were also placed on the new central plant DDC system and now the units are shut off during unoccupied hours.

The Facilities Manager said the building “seems to be breathing easier.” The pumps were always running hard and operating loudly. The cooling tower pumps shook the building upon startup. The mechanical room was cold in the winter and very warm in the summer. These somewhat subjective items have been mitigated and the DDC system is objectively showing us the energy savings. The main building loop pumps are operating at approximately 46% speed and are using approximately 10% of the original energy consumption. The cooling tower pumps are now operating at 66% speed relatively consistently and are using 24% of the energy. This building owner is not responsible for the setpoints of the tenant spaces, but operating this building has become significantly less expensive and the equipment will last considerably longer now that the loads have been reduced.

On to the next opportunity!