The ground source heat pump is a wonderful technology that will be vital in achieving energy efficiency goals this century. This technology isn’t new, but it is beginning to become more accepted as a viable solution for large scale, high efficiency HVAC performance. There are two main types of ground source heat pump systems: those that are “Ground Water” (also called Open Loop) and those that are “Ground-Coupled” (also called Closed Loop), see Figure 1 below. In either case, the water from the ground is pumped to a heat pump, where heat is either extracted out of or rejected into the ground and moved into or out of the conditioned space. 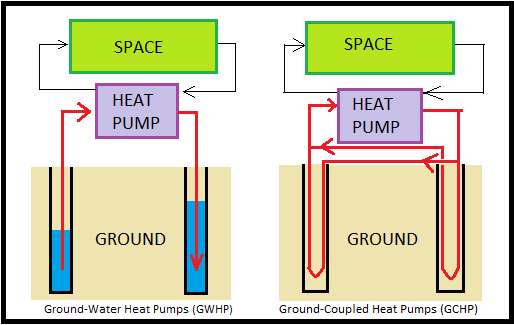 During the design of ground source heat pump systems, there are many important considerations that need to be addressed. One design consideration that is sometimes over-looked is the heat balance calculation of a ground-coupled system. When a ground-coupled heat pump system is designed, instead of rejecting heat to a groundwater well, the heat extraction or rejection takes place via heat transfer between the closed loops and the ground, effectively using buried pipes as a heat exchanger in the ground. The heat transfer between the ground and the pumped water in the buried pipes must be well understood by the designer in order to optimize the design and ensure performance over the life of the system.

Initial considerations that are critical to the design of the system are the underground properties of the proposed bore field site. The makeup of the earth beneath the site will dictate the depth of the wells that can be drilled, and the layers of materials will also determine the rate of heat transfer between the piping in the vertical wells and the ground immediately adjacent to the wells. In order to understand the ground’s ability to transfer heat away from the well (also known as Ground Thermal Conductivity), a test bore should be drilled and a Thermal Performance Response Test should be performed. 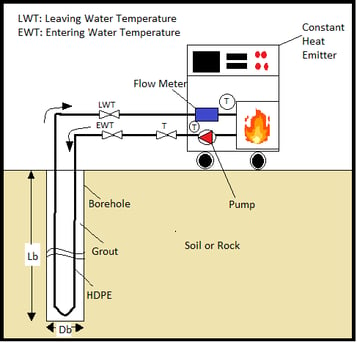 You might have heard that the earth maintains a constant temperature underground, so you might find it easy to think of the ground as an infinite heat source or heat sink, meaning the ground will maintain its temperature throughout the year regardless of what the wells reject or extract. In reality, the earth has limited capacity for heat to be extracted from it or rejected into it before it cools down or warms up too much to be useful for heat pump operation. This is because the ground has a relatively high thermal resistance, meaning the heat extracted from or rejected to it has a hard time dispersing into the area directly surround the bore hole heat exchanger.

For example, the thermal conductivity of granite is around 1.7-4 (W/m*K) while ground or soil can range between 0.33 to 1.4 (W/m*K). For comparison, dense concrete has a conductivity of 1.0-1.8 (W/m*K)[1]. Due to this thermal resistance, it can be helpful to think of the earth surrounding a bore field as a battery, one that can be charged up with heat in the summer when your building is being cooled and discharged in the winter when you are extracting heat to keep your building warm. The battery works well when it gets an equal amount of charging and discharging throughout the year, but it will ultimately run out of juice if you are discharging more than you recharge every year.

This discharging and recharging is a function of how much heating and cooling the ground source heat pump provides to the building. When designing a ground-coupled heat pump, take care to consider what loads the heat pump system will serve. A heat pump system in a residential or commercial space that has minimal internal gains may just serve the building envelope heating and cooling loads in which case the outside air temperature is the driving factor for how much heat you need to extract and reject over the course of the year. If the space being designed has larger internal gains from equipment, occupants, etc., then the loads served by the heat pump system will not depend quite as much on outside air conditions. In Vermont, we are decidedly in a heating driven climate. ASHRAE Fundamentals tells us that, based on the design conditions for Burlington International Airport, the heating degree days (HDD 18.3C) are 4015 while the cooling degree days (CDD 18.3C) are 292. Clearly, a ground-coupled heat pump system installed in a climate like this will be extracting more heat per year than it rejects per year to serve the envelope loads of a given building. This creates an imbalance for the geo-exchange wells for a heat pump system that is sized to handle the entire heating load of a building.

This imbalance in heating and cooling loads on a building over the course of a year has significant implications for a ground-coupled heat pump system. The largest implication is that any ground-coupled heat pump system will not be able to accommodate the peak heating loads without significant over-sizing of equipment for the cooling loads. A system that does not take into account the imbalance of annual heating loads to cooling loads on the ground temperature will ultimately result in a system that over cools the ground over time and will, at some point, result in a well loop temperature that is so cold the heat pumps won’t be able to extract enough heat to maintain the building indoor conditions.

Designers should be aware of the design nuances associated with the ground-coupled wells and their implications on a ground source heat pump design. While there are issues that can arise from a thermally imbalanced ground-coupled heat pump system, designers and owners should be aware that there are also options for ground source heat pump system designed to achieve a more balanced system. Some of the options are capable of increasing the overall efficiency of the heat pump system and all of them result in a high-performance system that is resilient and capable of years of high performance.

USP 800 Pharmacy HVAC Testing – The Devil is in the Details: Part 1