Is Electrification of Space Heating a Positive Step?

When I started in the energy efficiency profession 20 years ago, the object of my job was to reduce electric demand on the grid. This was to be accomplished through energy efficiency and a strong emphasis to fuel switch equipment from electric to fossil fuels (specifically electric heat to natural gas or oil heat). At the point of use (our building), traditional electric heat is 100% efficient, meaning 100% of the electricity within our building is transferred into heat within our building. But the electric generation (at the power plant), and the transmission, and distribution process makes the entire process about 30% efficient. This means an oil or natural gas heating system, operating at approximately 80% efficiency at point of use, is inherently more efficient than traditional electric heat given the current electric grid generation mix. Heat pumps, however, have changed this calculation, with heating efficiencies of over 300%. Thus, the world is changing back to electric heat through heat pumps (refer to Gretchen’s blog from February 2017, Heat Pumps Catered to Colder Climates; Will Increased U.S. Adoption Continue?). Is this a good thing? ‘Experts’ seem to agree that it is, but I have been curious to do this calculation myself as adding electric load to the grid goes against my deep-rooted mindset.

For this research, I analyzed the current and projected sources of electrical generation as well as the efficiencies of the generation and transmission/distribution of the electric supply. I used current Building Energy Code ASHRAE 90.1-2016 for end-use equipment efficiencies of furnaces, boilers and heat pumps.

Energy Efficiency is Having an Impact

First, let me put in a “plug” for energy efficiency. ISO New England, the non-profit responsible for securing the electric supply in Vermont, New Hampshire, Connecticut, Rhode Island, Massachusetts, and most of Maine, has reaped the benefits of energy efficiency. With a regional 1% increase in population between 2011 and 2018, the energy demand on an hourly basis has decreased. An example of a day without significant heating or cooling is shown in Figure 1 below. Also note the decrease during the hours of solar PV production between 12:00-17:00. 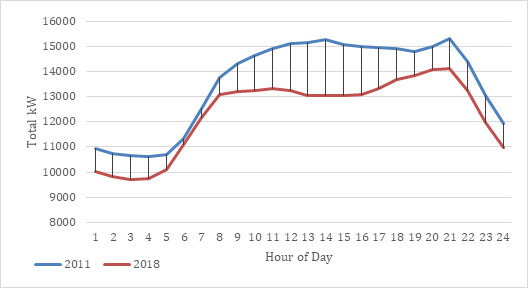 Sources of Electricity in New England

Historically, ISO-NE electricity was seen as relatively ‘clean’ due to a high percentage of hydro and nuclear, but these plants are aging and ISO-NE is looking at sources to replace them. As Figure 2 shows, ISO-NE is projecting to mainly source this deficit with natural gas. 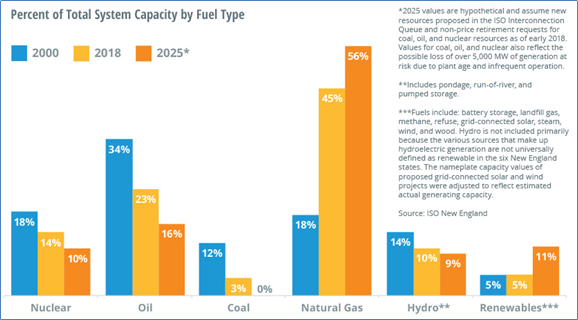 Figure 2 shows ISO-NE had a total of 42% fossil fuels in its mix in 2000. Today, the mix has significantly increased its reliance on fossil fuels to 71%. Furthermore, ISO-NE is projected to stay this heavily dependent on fossil fuels over the next eight years, with renewables (including hydro) only increasing 5% to a total of 20% by 2025.

Overall Efficiency of The Grid

Oil and natural gas power plants generate electricity at 32-38% efficiency and transmission/distribution line losses account for a further 8-15% loss in efficiency. Renewables and hydro do not have the generation losses, but they do experience the same transmission/distribution line losses. This means the overall efficiency of the ISO-NE grid, from generation to our buildings, with the source mixture as detailed in Figure 2 above, is approximately 39% in 2018 and 44% in 2025.

If the grid efficiency is approximately 39%, the question I want to answer is if electrifying our space heat with heat pumps is more efficient and generates less carbon emissions than the traditional fossil fuel (oil, propane, or natural gas) boiler or furnace. (Sorry, some Vermonters will advocate for a pellet boiler, but that’s for a different blog.)

Using the current ASHRAE 90.1 residential building energy code, average electric heat pumps (a combination of air-air, air-water, and ground source) have an average minimum efficiency of 313% (COP=3.13) and fossil fuel furnaces and boilers have an average minimum efficiency of 79.9%. Applying the grid’s 39% efficiency to the average heat pump brings its total efficiency to 123%. This clearly shows that even though the grid is so inefficient, electrifying our space heat by using heat pumps is a positive step for this planet.

So, the thing we should all be working towards is increasing the renewable portion of the grid’s power source. 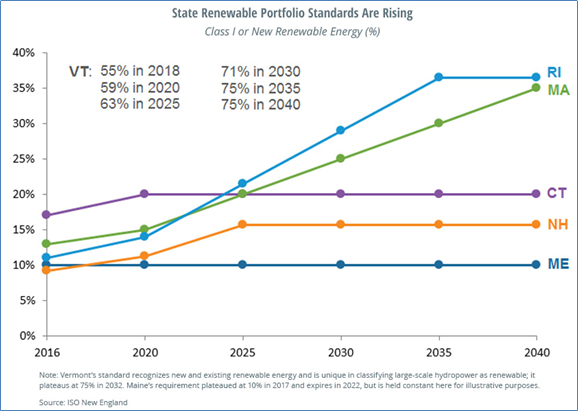 These state requirements are independent of the ISO-NE forecasts and I hope they will influence the grid’s renewable energy contribution to exceed the current ISO projections.

The Importance of the Project Coordinator Role in Building Commissioning