Technology and innovation have brought us great advances in energy efficiency. As examples, just look at the shift from incandescent lights to fluorescent lights and now to LEDs, or the move to variable air volume (VAV) air distribution systems from constant volume during the energy crisis of the 1970s. Those two evolutions alone have probably saved yotawatt[1] hours of electricity since they were introduced. The trend continues today with things like advanced building lighting controls and energy recovery air handlers.

In the last several years, we have seen an explosion in the number of mobile devices be they cellphones, smart phones or tablets. According to the Pew Research Center, 90% of all American adults have at least one cell phone and 64% have a smart phone. Many of us have more than one device…and they all need to be charged!

Enter the plug-in rectifier. That's what our smartphone charger really is, a device that converts AC power to the 5V DC required by our devices. If you own one of these (which you do if you own a mobile device), you know they tend to get warm, even when nothing is plugged in. That’s energy loss. Some call it “vampire” or “phantom” load.

Combined Impact of Your Personal Load

The charger is siphoning off a little bit of electricity all the time it’s plugged in whether or not you are charging your device. Phantom loads tend to be relatively small on an individual device basis and for this discussion we’ll assume that’s about 0.10 watts (real numbers vary all over the map and are likely higher than 0.10 W but I wanted to use a very conservative estimate). The US Census Bureau says there are about 250 million adults in the US. If 90% of them own a cell phone and they each have a charger plugged into the wall that draws 0.10 watts when nothing is attached, that amounts to 131 million kilowatt-hours a year[2] of wasted electricity, or the equivalent of over 15,000 average US households. The solution is easy enough, though. Unplug them when they’re not in use. Most of us don’t do that, unfortunately, but it’s still within our power to do so. We are in control of those phantom loads.

What we will not be in control of is the most recent evolution in technology that is becoming more and more pervasive. These: 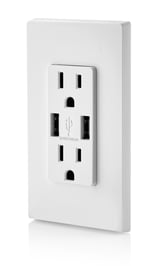 Any new hotel will have at least two of these in every room. Hospitals are putting them into new or renovated patient rooms as well as common areas like waiting rooms and cafeterias and they are commonplace on college campuses.

It is not easy to find manufacturer’s data that tells you exactly what the phantom load is for a receptacle with two USB ports (as in the picture). However, they all have them. One large manufacturer has a published phantom loss of 0.63W per dual receptacle. For the sake of argument and ease of math, let’s assume they average 0.50W.

A moderately sized hotel might have 120 rooms. With two in each room and given similar use as my example above, those receptacles in this one hotel add up to 700kWh per year. That’s equivalent to leaving two, 40W incandescent light bulbs on all year long. I don’t know about the folks reading this, but when I was a kid, if I walked out of a room and left a light on it took about 3 seconds before I heard “hey, whaddya think…I own stock in the electric company?” -- my dad’s way of saying turn off the light if you don’t need it!

The USB ports actually draw power even when nothing is plugged in, so even if you do unplug your charger when not in use, these ports are still drawing a small phantom load. And, currently we have no way of turning these receptacles off when not in use. Pretty soon you’ll be seeing these in new home construction and, possibly, added to commercial office buildings. I can’t predict what the actual market penetration of these will be, but I’m pretty sure it will be significant.

One thought is to return to the old design of switched receptacles. Wherever one of these gets installed, install a switch right next to it. Add a red LED to the receptacle and the switch that illuminates when there’s power flowing to the receptacle and you’ve got a simple feedback mechanism. At least that will put the control back in the user’s hands.

[1] One yottawatt-hour is 1021 kilowatt-hours, or in layman’s terms a colossal boat load. Maybe yotawatts is a bit of an overestimate, I don’t really know, but it’s a cool word anyway.

[2] I assumed everyone charges their device overnight for 8 hours per day, leaving 16 hours per day of phantom load.

OAT (Outside Air Temperature) Reset Is Like Your Hammer

Is the Energy Efficiency Field Growing Up?