Back in 2012 I polled our office to find out what mobile apps for HVAC and energy analysis our engineers were experimenting with in the field or back at the office, and summarized those results in a blog post Top Apps for HVAC and Energy Analysis. I also wrote an update to that post in 2013. As you’re undoubtedly aware, things change quickly in the tech sector—and the app marketplace for engineers and commissioning folks is no exception. Given that it’s been two years since I last dug into this topic, I figured it’s time to see what’s new. As with the last posts, I have two caveats before we begin: first, while these apps can be very useful, we still don’t use them for critical analysis, but more as a very powerful back-of-the-envelope equivalent. Critical analysis still happens desk-side for us. Second is that we are an office with a mix of smartphone platforms—a little more than 50% use Apple’s iOS with the balance using Android. We also have a couple of iPads for field use. For simplicity in writing this, I’ve focused on iOS apps—but for most of these, Android versions are also available in the Google Play store.

So, what are we finding useful today? Well, some are the same apps we found helpful in the past are still favorites—and through developer updates and evolution over time, they have continued to get better. One of these for me is HVAC Toolkit by Carmel Software—this is a useful tool with psychometrics lookups, steam tables, pressure drop calculation, and many other useful tools all in one, which is very helpful to have in the field. I use this probably a few times a week depending on the types of work I’m doing. The app is mostly aimed at engineers and would be useful for technical facilities operators as well. At $23.99 it is one of the more expensive apps that we use, but at least for me, worth it.

This is a Microsoft app, released in the past few months, which turns your phone into a scanner. You may have heard this functionality claimed before by apps, but Microsoft has really nailed it. When you fire it up and aim it at a drawing, office document, nameplate, whiteboard, receipt (or really any rectangular surface) the app automatically crops and straightens the image and stores is as one of several file types (image, pdf) and stores it to the cloud (OneDrive and others) or lets you email it. It also does OCR (optical character recognition) in the background yielding searchable text on scanned documents.

Office Lens is a great tool for general use, but one specific area I have found it useful is in retrocommissioning efforts in older buildings—where one of first tasks is collecting lots of documentation from the field about existing building systems. You would be surprised to know (or maybe not) that many owners have only one physical set of documentation for their building. With this app it is easy to collect a bunch of documentation for at least the initial pass review, without having to send out that one-of-a-kind document for scanning (if it’s even physically possible).

Equipment manufacturers have generally been investing in their tech platforms over the past few years in an effort to keep/gain tech savvy clients and to help their service techs in the field. Grundfos is one such firm with an interesting offering—Grundfos Go—which provides a fairly slick interface into their Magna series ECM variable speed pumps. Through the application, and with the use of a Bluetooth gateway adapter (model MI-301) a tech, engineer, or owner can connect to these high tech pumps and configure operating setpoints, readout operating parameters, change modes, and download reports such as equipment and trend data. Output reports include a 3-D graph with pressure/flow in the x-y axis and hours in the z-axis. This can be particularly useful in diagnosing operating problems with newly installed equipment. Note that while the app is free, the Bluetooth gateway is a few hundred bucks and the pumps are of course more.

This app, published by ASHRAE, is based on ANSI/ASHRAE Standard 62.1-2013, Ventilation for Acceptable Indoor Air Quality. I must confess I have not demoed this app thoroughly, though I am looking for an opportunity to use it. It allows users to assemble data on a space-by-space basis with fields including designated space types, square footage and population—among others. It then provides required ventilation on a square footage and person basis. I can imagine it could be very useful to have for assistance in doing takeoffs of spaces in the field or other quick calcs of ventilation requirements. 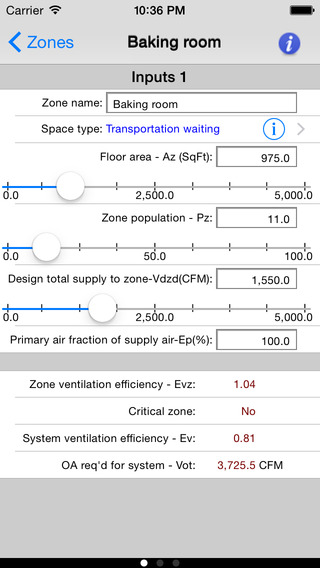 A new thermal imaging company, Seek Thermal, has been working on developing a simple, lower priced thermal imaging camera that combine a sensor package with the display and computational horsepower of a modern smartphone. The $250 Seek Thermal LW-AAA camera snaps into an iPhone Lightning port (Android micro USB version also available) and can be used to provide high resolution thermal images. While the product straddles the consumer electronics / professional sectors, given the low cost, it still is billed as being appropriate for inspection uses—and at $250 may be well worth having in your tech tool kit.

Starting in November of last year (May 2015 for Android), Microsoft released Excel as “freemium” or free for basic features. For more in depth features, you’ll need to buy a subscription to Office 365, but the basic features could still possibly make it the “killer app” for engineers. If you need to create reference tables, take down basic field data, do limited calcs, or build simple custom calculators—all of this you can do with the free version of Excel. If you’re an office desktop user, this can be very, very helpful.

Tip Box: Despite being a relatively narrow field, there are thousands of HVAC and energy analysis apps out there. How do you dig thorough the hundreds of titles? Here are my recommendations for improving your odds at finding something good: 1) Find developers with apps that you like and see what else they are working on—just like a reputable contractor, if app developers have done an excellent job with one project, they’re more likely (though not guaranteed) to have other jobs they’ve done well out there. 2) Check the release data and the version number—if the last update was released in 2012 and the current version is still in the 1.X.X range, it is unlikely that the developer is keeping it current. One example of this is the Bell and Gossett System Syzer App which, while the underlying data may be good, was last updated in 2012 and still even reflects the iPhone 4S screen size (3.5” diagonal ) without an update. For the company which makes the ubiquitous System Syzer calculation wheel that has lived on every HVAC engineer’s desk for decades, they have certainly dropped the ball on a transition of this tool to the modern world.

What apps out there are you finding to be useful?

Creating a Bid Document for a Ventilation VAV Retrofit