We are wrapping up the commissioning of a water source heat pump system for a 120+ room hotel. Our involvement began in the design stage when the initial concept was to use condensing boilers to heat both the domestic hot water (indirectly) and heat pump loop. While this is a fairly typical scenario, especially in the hospitality industry where first cost is typically given a very high priority, it leaves a lot of the boilers’ potential energy efficiency on the table.

In an indirect domestic hot water (DHW) application, the boilers heat the DHW via some form of a heat exchanger to keep the heating hot water and domestic water separate. In hospitality applications, there is a need for 160 degree or sometimes 180 degree DHW for kitchen or laundry applications. The boilers must supply water that is hotter than these temperatures in order to transfer heat to the DHW. At temperatures that high, in an indirect application, it becomes very difficult if not impossible to make the boilers condense. 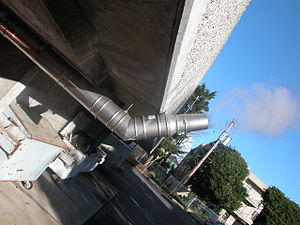 Our first step was to recommend that the boilers be separated into two, independent systems. One set just for the DHW and another just for the heat pump loop. Since the heat pump loop only needs 90 degree water at most, it is a perfect application for a condensing boiler system. This recommendation was accepted by the design team and the owner, and it was incorporated into the next round of design.

When we saw the updated drawings we noticed that in addition to the heat pump loop, the heating boilers were providing hot water to some unit heaters and cabinet heaters. That’s not terrible in and of itself except that they were sized for - you guessed it - 180 degree hot water. There goes a bunch of hours of condensing operation right out the window. When we asked that the dozen or so unit and cabinet heaters be re-selected as heat pumps, we were told that couldn’t be done. Despite our pressing for some solid reasons why not, those devices remained unchanged. We did, however, convince the design engineer to re-select them at a 140° F design temperature and implement a hot water reset schedule down to 90° F (the engineer would not go any lower). That greatly increased the hours of condensing.

The building is now nearing completion and we are ready to functionally test the system. The controls contractor recently made us aware that he has changed the reset schedule to a minimum temperature of 120° F instead of 90° F. Why? There are aquastats on the cabinet and unit heaters that don’t function below 120° F meaning that at any lower water temperatures they simply will not run. In my opinion, those devices aren’t even needed, especially because the unit and cabinet heaters are controlled by the building management system and we’ve recommended that they be abandoned. I am anxiously awaiting the design engineer’s decision regarding elimination of the aquatats.

Regardless of the design engineer’s decision, the lesson here is that even the smallest equipment detail can have a significant impact on system operation. While we spent the time and effort to get the hot water systems designed as efficiently as possible, the fate of the system’s efficiency lies in a handful of $100 dollar devices.