Modern Building Automation Systems consist of three core conceptual components: information inputs (sensors, switches), controls outputs (actuators, VFD’s, relays), and a brain (controllers and a head-end). Traditionally, copper cabling of different kinds has connected all of these devices together in some manner. Each actuator and sensor may be connected directly back to a central controller, or often through local equipment controllers (such as a heat pump above a drop-ceiling) equipped with controls cards with a network interface. Regardless of the specific wiring scheme, the bottom line is that the building owner becomes the proud owner of a virtual spiderweb of controls cabling. In new construction, cabling can be installed before finished walls and ceilings are in place, so installation is not very disruptive and can be cost effective. For retrofit applications however, running new cabling can be very labor intensive and disruptive to surface finishes (drywall, woodwork), which can be ultimately very expensive. Until recently, no real alternatives existed to avoid the extensive wired networks required for building automation systems. But now some new players in the market are beginning to introduce wireless alternatives. In the case of sensors such as space thermostats, manufacturers have begun selling wireless sensors/transmitters which are battery powered. Several vendors market these sensors and with the specified lithium ion batteries, battery life of up to eight years is claimed. For some applications, this is perfect--especially for a facility with, for example, only around four or five zones, stocking and keeping track of replacement batteries for only a handful of wireless thermostats with eight-year run times is relatively straightforward.

But what about for a building with tens of zones, perhaps with thermostats installed in tenant spaces with limited maintenance access? As a building owner, keeping up to date on battery replacement and avoiding maintenance calls can become difficult. What if, instead, wireless sensors could operate efficiently enough that they could operate using power generated by the sensor itself?

Wireless sensors and even some actuators have begun to incorporate energy harvesting technologies to either augment battery life, or completely eliminate batteries. In the case of sensors, they typically involve the use of a very efficient wireless protocol in combination with solar panels to generate power. Often there is an energy storage mechanism onboard, such as a battery which charges and discharges or a supercapacitor--however in the case of the battery in this context, it is not a consumable. Some of the most widely available of these sensor types at present are space thermostats and lighting occupancy sensors. Other controls include wireless on-off wall switches which are powered by the switch actuation using piezoelectric effect (the same technology which makes a gas grill lighter spark).

More extreme examples of the potential of these energy harvesting technologies (which are not yet available in the marketplace) are wireless zone valves which generate electricity from a temperature difference between, for example, a hot water pipe and the ambient air using the thermoelectric effect.

The most high profile promoter of this technology is the EnOcean Alliance, which is an industry trade group which promotes self-powered wireless monitoring and control systems and promotes the development of open wireless standards. 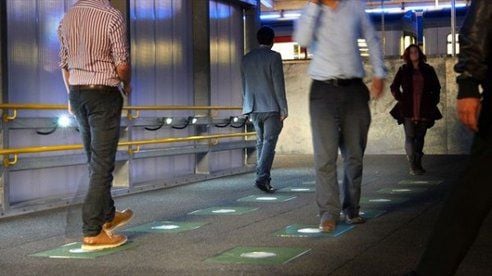 While traditional wired sensor and actuator technologies remain appropriate for many applications, the growing availability and variety of self powered sensor technologies provides more options to design engineers and controls contractors to meet specific application challenges--especially in retrofit applications. And as prices for these kinds of technologies continue to fall, they may be able to provide new levels of controllability and monitoring information throughout buildings that would never have been cost effective with wired-only systems--resulting in potential for higher levels of occupant comfort and more efficient building operation.