What is the Cost of a Damper Actuator Installed Backwards?

While performing a recent functional performance test for a school HVAC system, I discovered something that had gone unnoticed by the contractors and building owner: a motorized damper actuator installed backwards. This damper, one of more than a dozen installed in the building, controls the outdoor air intake for one of the ventilation air handlers. When a discovery like this occurs (and discoveries like this are common in building commissioning), it begs the question: what would the cost impact be if the condition went unnoticed? Without commissioning, I am pretty sure that the condition would have gone unnoticed for a very long time, perhaps even for the life of the unit. By the time of the functional performance test, the unit airflows had been balanced, the school had been occupied, and the air handler had been running for several weeks. The backwards damper did not become apparent until a full functional performance test was witnessed. With the unit running in 100% outside air mode, I noticed a slight rumble that faded in and out from the fan section. I realized that the fan was surging and was evidently working against excessive static pressure. It turns out that the excessive static pressure and lack of supply airflow was caused by a closed outdoor air damper. When we commanded the outdoor air damper open, nothing happened. When we commanded the outdoor air damper closed, we could feel the cold winter air enter into the heat exchanger and the fan finally came out of surge.

So what is the cost of a damper installed backwards? Well, the first thing that came to mind was the energy that might be wasted as the fan fights against a closed damper. At the office, I crunched through a quick fan energy calculation and realized that the closed damper would actually save energy. Instead of moving 3,550 CFM of air at 2.85 in. Wg total static pressure, the fan would instead be moving 0 to 500 CFM of air at 5 in. Wg total static pressure (surge region of the fan curve). In surge, the fan motor would actually consume less power, with a $250 per year reduction in annual fan energy costs.

It turns out that fan energy isn’t the only energy to consider – there is also the heating energy impact of the closed damper. The outdoor air damper may be closed, but the exhaust air damper is still open and the exhaust fan continues to draw air through the heat exchanger. With the heat exchanger unable to transfer heat from outgoing exhaust air to incoming outdoor air, the heat in the exhaust air is wasted. In essence, the exhaust fan is drawing air from various cracks and openings in the building envelope, the air is heated by the spaces it passes through, and then the air is dumped outside. With a few more calculations that account for infiltration airflow, outdoor air temperature, and loss of heat recovery, I estimated that the closed outdoor air damper imposes approximately $500 of additional, annual heating load. 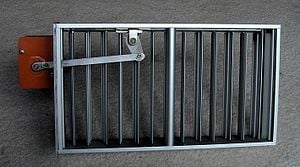 I was somewhat surprised that the energy cost impacts were not higher. Was I missing something? No, not from an energy standpoint, but from a total impact standpoint…absolutely! The true cost of a backwards damper is paying for a system that doesn’t do what it is expected to do, in this case provide ventilation air. A ventilation air handler such as this one costs approximately $30,000 to purchase and install. This cost doesn’t include the necessary design engineering. $30,000+ is quite a lot of money to pay for something that doesn’t do what it’s supposed to do. Furthermore, if you consider the impact that ventilation air can have on student learning and performance, the cost to individuals, families, and society can be much, much higher.

As you can see, the true cost of this backwards damper actuator is not only in dollars and cents. It’s in building occupant health and comfort, and most importantly, it’s in the wellbeing of the students and teachers.