Automated building control systems for HVAC applications have been available in some form for commercial building owners for approximately 60 years. These started with pneumatic-based control systems that first appeared as early as the 1950s. Pneumatic systems began to be replaced by semiconductor technology based devices (controllers, and eventually complete computer based control systems) in the 70s and 80’s. These systems can generally be referred to as DDC (direct-digital-control) systems. While the features, robustness and usability of these computer-based control systems have improved dramatically over the years, the fundamental architecture has remained the same—essentially, networked controllers within the building are connected to a central computer server which coordinates/schedules, provides a graphical user interface for operators to change setpoints, enable/disable subsystems and components, review alarms, etc. With the advent of the Internet, these control computers are now able to be more easily accessed remotely as well. These modern DDC control systems have been very successful at managing systems in larger buildings, but there are some drawbacks. Primarily, there are large associated capital costs (server hardware, extensive wiring, programming), and ongoing server maintenance/operating costs (IT support, software licensing, etc). The first costs and ongoing costs both scale somewhat as building sizes decrease, but generally, at some point, the fixed costs make full DDC systems prohibitively expensive for some medium and many small buildings. Instead, the options available for a building owner not able to afford a DDC system are typically rudimentary, stand alone controllers not integrated to a network or accessible remotely. For example, a Tekmar controller which, while proficient at the jobs it does, is limited in its control of a number of components and sensors. 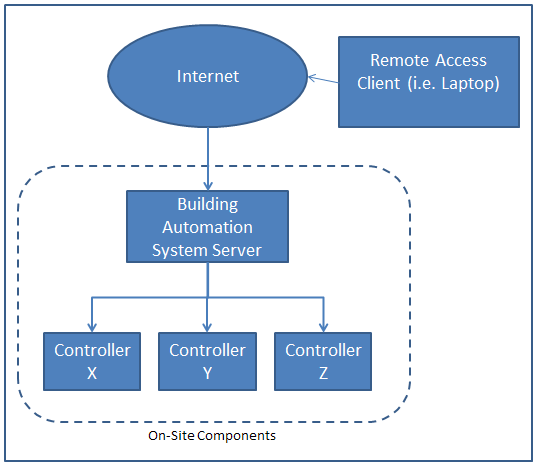 Cloud based services—or services/functions hosted on remote servers or larger server "farms" on the Internet rather than locally—are becoming more and more common. As an example, it used to be that all companies hosted and managed their own onsite email and file sharing servers. Only larger/more profitable companies could overcome the upfront/ongoing costs associated with these services, so access for medium/small firms was limited. Now, everyone can affordably gain access to email, shared calendar, cloud file storage, etc, for relatively low per-user costs or even free through ad-support—several well known brands have services of this type. And significantly, these services involve no local hardware such as a mail server—they simply work by local machines (individual worker’s laptops or desktops) connected to the server facilities through the Internet—eliminating almost all setup and ongoing server maintenance costs. The result is that the services can scale affordably in either direction.

This same model is beginning to emerge in building automation: instead of networked controllers connecting locally to an onsite DDC server, companies are developing controllers that essentially network together locally and connect up to an online server service via the Internet. This cloud-based service acts identically to a DDC server installed on the premises of the building, but takes advantage of a lot of the same economies of scale that make web email cost competitive. 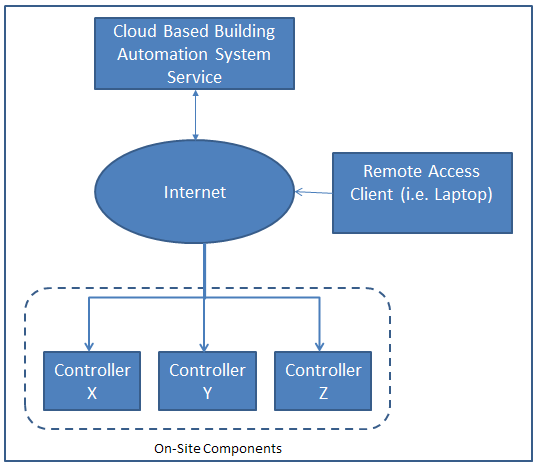 So what does this mean to the average building owner? Well, it means that a huge segment of the market now has affordable access to a very full featured, cloud-based version of DDC control systems that have been available for years to larger customers. For small/medium buildings, which in most areas of the country is the majority of the building stock, this has the potential to enable owners to have more flexible energy monitoring and management features, facilitates more remote alarming and troubleshooting options for owners/property managers, and much more. We are excited about this emerging area in the field of building controls and are looking forward to seeing it grow and develop over the coming years because we believe it will bring significant value to owners of smaller buildings.