Fault Detection and Diagnostics (FDD) is an exciting new software tool used to contain energy costs and diagnose energy issues that affect the life and functionality of HVAC equipment and lighting. FDD takes the ability of the direct digital control (DDC) systems a giant leap further into analyzing the performance of these building systems.

The performance of building systems deteriorates over time. Sensors shift out of calibration, valves and dampers don’t close fully after a few years, and well-meaning maintenance personnel reprogram setpoints and schedules to “fix” a problem. Degraded performance can exist undetected for years without notice, increasing the building’s energy costs slowly and affecting the life of the equipment.

Direct Digital Control (DDC) systems control and monitor the operation of a building’s HVAC and lighting systems. It is the “brains” of the building. A comprehensive DDC system provides the means to schedule what equipment should be running, confirms it is running and sends an alarm if it is not operating as it should. The DDC can also be programmed to perform consumption calculations of various components (chilled water plant, heating plant, and air handlers) so that one can compare today’s efficiency against historical records. It is the crucial step required to control the building energy systems efficiently and effectively.

FDD – What The Brain Is Telling Us

FDD is a database designed to collect, analyze and distill all of this DDC information into a format that is user friendly to the building owner. FDD can range from a simple analysis of the building’s energy consumption to continuous commissioningTM of all of the equipment in the building.

The DDC system is capable of calculating the building system performance (for example, the chilled-water plant efficiency in kW/toncooling) and a dedicated owner can review the DDC screens to analyze this information. This metric can be compared to historical consumption and the building owner can analyze, over time, if things are getting less efficient and when retrocommissioning is warranted. In addition, if the consumption suddenly changes, the building owner can look back as to when the change occurred and correlate this to what was happening in the building at that time. Did the office get rearranged and more people are in the space? Or did a piece of equipment get replaced and the controls weren’t programmed correctly? This procedure takes time and focus, both of which are scarce when there are so many more pressing issues for an owner to contend with. Mostly, if there are no complaints and no outright failures, the problem goes undetected and the energy bills climb.

The FDD program can analyze this DDC data and relay the problem along with a probable solution. By analyzing each control point, this software can alert the owner to the exact piece of the intricate HVAC system which has a problem. For example, in an air handler like the one represented below by a DDC graphic, if the heating valve does not close properly, the cooling coil will work harder (using more energy) to overcome this unintended heat load. This type of problem will never be found as long as the cooling coil is capable of meeting the higher cooling load. If the coil is not, the space will overheat, people will complain and the owner may be forced to buy a new – larger – air handler because, obviously (they incorrectly conclude), this unit wasn’t big enough to handle the load.

A leaking hot water valve can surreptitiously waste energy by adding load to the cooling coil.

Historical trending data of the consumption of this air handler will show an increased consumption over time, but will not alert the owner as to the cause of the problem. The DDC will not alarm on this component because it only sees that the valve is commanded closed and, according to the valve, it is closed. That leaves the owner or a controls contractor to study the DDC system screens to analyze which particular component is causing the issue. 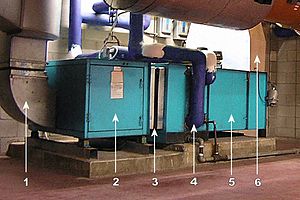 In contrast, the FDD software diagnoses the cause of the problem because it analyzes the performance of the air handler. By comparing the temperatures of the various points within the air handler, it can detect when a “closed” valve is still affecting the functionality of the unit. When the temperature after the “closed” heating coil is higher than before the coil, it knows there is a problem and identifies it to the owner in a report. The owner, with training, can review these reports on a regular basis and prioritize the maintenance of the equipment. In this example, the report will identify a leaky heat valve, the owner will prioritize the maintenance of the valve and the problem is fixed in an hour. Could the owner analyze the DDC temperature points him/herself? Sure. Often, however, this doesn’t become a priority until there are complaints and then it is an emergency situation that doesn’t allow for much time for analysis.

Even the most efficient new buildings with state-of-the-art, comprehensive DDC systems start losing their efficiency from the day the commissioning agents leave the site. Building owners move their focus from building performance to their day-jobs and the performance deteriorates until issues arise. An FDD software system works with the DDC system data to analyze and diagnose issues. It provides continuous commissioning of the building and a forum with which the owner can prioritize issues. It reduces complaints, maintenance time, emergency calls and energy consumption as well as improving the longevity of the equipment and increasing system reliability.