Retrocommissioning Your Building for Big Savings

Cx Associates worked with the owner of the Howard Opera House building in Burlington, Vermont, and the Burlington Electric Department (BED), to address issues related to the building's aging HVAC infrastructure. The four-story building in downtown Burlington was built in 1879. Over the years, it has housed a department store, an opera house in the upper floors, and various other commercial and office spaces.

The current owner of the Howard Opera building contacted Cx Associates because he was interested in investigating ways to save energy; reduce building operating, maintenance, and equipment replacement costs; as well as extending the lifetime of the HVAC equipment. The existing central plant equipment was over 20 years old, but it had been well maintained. The owner worked with both BED and Vermont Gas to identify several areas for improvement for the aging system. BED has been a leader in energy efficiency, providing building owners with smart incentives to make efficiency improvements to their facilities. The owner then contracted Cx Associates to act as the owner's representative and commissioning agent to develop, manage and commission the energy improvements for this building. We worked with the owner to develop a detailed cost/benefit analysis for each measure, including taking into account any utility incentives.

After this evaluation, the main focus of this project was the replacement of the controls and the variable frequency drives on the central plant pumps. These measures provided immediate savings. They also enabled the owner to identify and program further energy saving measures, and identify equipment maintenance issues through trending of equipment performance. 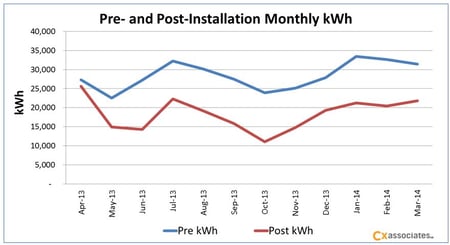 To find out how much money these measures saved, click here for a detailed case study of this project.

Founded in 2002, the non-profit Vermont Green Building Network (VGBN) works to advance the...