The International Space Station (ISS) recently had a breakdown in its external active thermal cooling system (the “EATCS”, because NASA loves acronyms!) that helps to keep systems inside and outside of the space station cool. For a little review of basics physics, let’s recall that space is a vacuum. In the same way that a vacuum flask keeps coffee piping hot for hours and hours, the Space Station is basically wrapped in a vacuum flask that keeps it from heating or cooling through ways in which we are typically familiar with. It can’t cool itself through conduction (i.e., heat passing through the outer wall) or convection (i.e., air moving heat away from the outer wall, thereby cooling it). These modes of heat transfer can’t work in space because there is no air surrounding the station to pass off waste heat to! 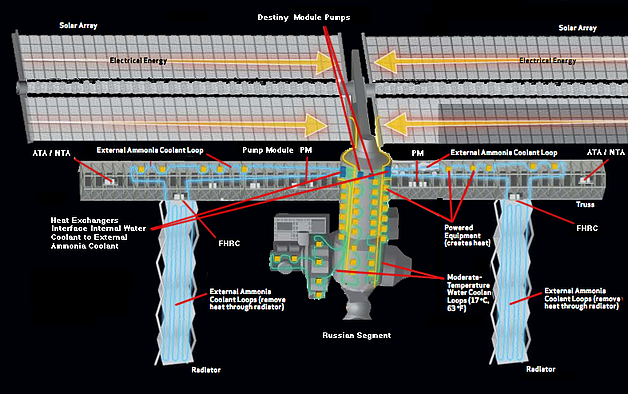 So, problem #1 is that the ISS can’t naturally cool in ways we typically first think of on earth (there is a third mode of heat transfer that we’ll discuss below). Problem #2 is that there is a ton of heat generated on the ISS from all the experimental equipment, life-support systems, solar power system, and the heat from the astronauts themselves. Add to that the sunlight hitting the station—the sun alone can deliver nearly 1.4 kW of heat per square meter (though structures are jacketed in white/reflective materials to reduce absorption of this heat).

Despite the fact that the ambient temperature surrounding the space station is around -250F, the station requires a very reliable set of cooling systems in order to allow the equipment and occupants to be comfortable. And since the space station is surrounded by the vacuum of space, the ONLY way to remove all of this heat is through radiation. Radiation is thermal energy transfer in the electromagnetic spectrum—in the same way that the heat from sunlight and the heat from a bonfire warm us from a distance.

The space station’s active cooling system moves around a liquid ammonia coolant, collecting up heat from equipment, crew compartments, and other systems—which it passes through a large radiator with a huge surface area, thereby emitting heat back into space.

Since this is such a critical task to maintain the ISS, there are two completely independent cooling system loops to accomplish this task—loop A and loop B. Loop A currently has the problem. And what is the problem? A bad control valve. In order to maintain an acceptable loop temperature, the control system for the coolant loop modulates a bypass of the radiation panels—when the loop temperature rises, more flow is directed to the radiators. When the loop temperature drops, more flow is bypassed around the radiators and back out to the system. The problem the ISS is currently experiencing is that the valve “thinks” it's closed (based on position feedback from the valve actuator) but the valve is still open. Based on the location of the valve, this means that flow is being continually directed to the radiator, even though the loop is too cold.

So who cares if the coolant loop temp is too cold? They’re trying to cool right? Well, it turns out that the ammonia, because it’s highly toxic, is not allowed to enter the crew compartments of the ISS. Instead, water based heat exchangers transfer heat from the compartments back out to the ammonia. If the ammonia coolant is too cold, the water side of the heat exchangers could rupture, and lead to ammonia being released into the crew compartments. This would be a very bad thing. So the system is shut down and NASA plans spacewalks to repair the broken valve over this holiday week.

So what are the takeaways? In short, if you think your HVAC problems are bad, be glad you don’t have to don a space suit to go fix your bad cooling loop bypass valve! 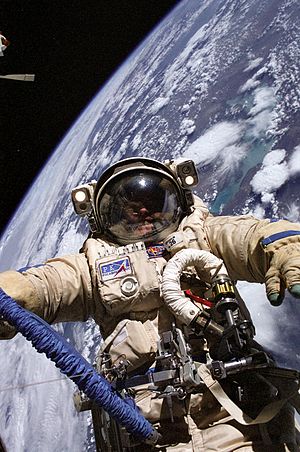 LEED Version 4 and Its Effects on Commissioning Credits

Smart Lighting for People and the Planet