This is the second in a series of posts focused on the connection between energy efficiency and sound control. It may seem intuitive that efficient mechanical systems will also be quiet mechanical systems. However, it generally makes sense from cost and performance standpoints to deliberately design with both in mind.

It is possible, however undesirable, to apply sound control strategies without actually engineering a solution. For example, if manufacturer’s performance data for a duct silencer is used without understanding the system efficiency impact on of the silencer and project-specific fan sound frequencies, the result will be a design that fails to satisfy your client’s sound targets, and also imposes energy penalties and increased operational costs over the life of the system. A balance can be struck between appropriate background sound level design and equipment efficiency, as the following examples show.

To understand the acoustic impacts of part load fan operation, the table below shows quantitative and qualitative sound perception impacts for reduced fan speed compared to full speed operation. Based on a typical VAV system load profile with an average fan duty cycle at around 60% flow load ratio, most of the time, the main fan will operate at a speed that is ‘clearly noticeably quieter’ than full speed operation, even before sound controls are applied. 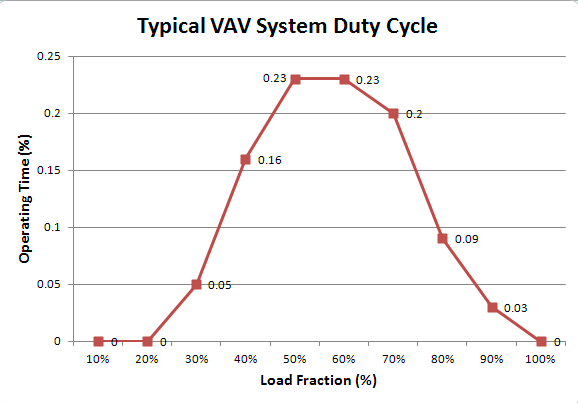 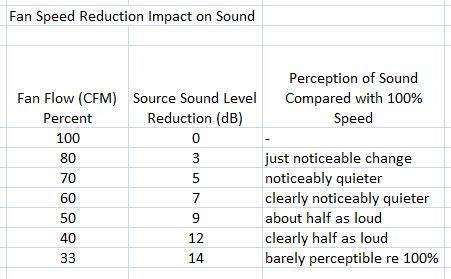 Potential first cost savings may be possible by resisting the urge to substantially oversize ducts throughout the building to reduce air velocity (as is sometimes recommended for sound control), and instead treat sound sensitive rooms on a case by case basis. This is possible because as the part load graph above shows, the fan is not running at full speed (the air is slower) most of the time. As shown, 85% of the time the velocity will be below 80% fan speed.

Additionally, right sizing and staging of Dx cooling equipment with respect to part load operation will simultaneously improve efficiency and reduce the potential for irritating sound environments due to compressor short cycling. If a packaged unit is deliberately selected larger to run at a slower quieter fan speed for the same CFM, the standard packaged compressors and motors may very well be over-sized for the application, which could create inefficiencies and acoustical issues. Right sizing of equipment for the load profile, and planning for smart acoustical adjacencies, can overcome both sound and efficiency issues.

While over-sizing the fan diameter for lower tip speed at equivalent CFM could be a good sound control strategy, the motor selection should reflect the intended operating point of the fan to avoid motor efficiency decreases at part load (see graph below). 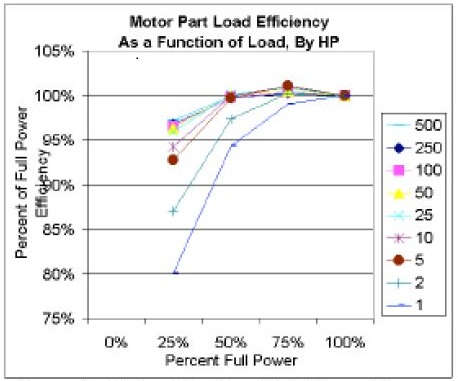 Figure 3. Motor Part Load Efficiency As a Function of Load, By HP. By John Maxwell, “How to Avoid Overestimating Variable Speed Drive Savings”, 2005

The table below shows the change in sound perception for operation of multiple fans (such as multiple cooling tower cells) at different design speeds. In the table below, a possible strategy is to use two cells each running at half of the design CFM (9 dB reduction for half flow, plus 3 dB for two fans, for a net 6 dB reduction). This approach should result in clearly quieter sound levels with only a small impact on motor efficiency for motors over 2 HP, and an increased heat transfer efficiency due to the use of multiple cells surface area for heat rejection.

In this case, an upfront investment in additional cells, or upsizing cells, may help meet both sound and capacity control design goals. Motors should be right sized to operate in their most efficient range. Pony motors (smaller redundant motors which accommodate part load operation) may be an option for optimal motor loading. VFDs may represent environmental sound risk mitigation in addition to capacity control, and VFD efficiency penalties of around 3% may be partially offset by using direct drive fans and avoiding 5 to 8% belt losses.

If fan cycling is used for capacity control of multiple cell cooling towers, the following table shows a simplified view of the impact on sound levels for multiple identical sound sources.

The length and orientation of the cooling tower assembly are design variables which can be optimized for reduced sound impact. For initial planning purposes, it is useful to consider potential acoustic impacts and benefits of quantity of cells operating. If the fans are single speed (rather than variable speed), the fan and motor can be selected with an optimal motor loading and operating point, and then system efficiency is achieved by turning cells off to match the load when not needed.

Deliberately engineering a system for both low noise and energy efficiency will, and should, result in different equipment selection and system design than would be the case where one or the other is not explicitly considered.

Additional design strategies for efficient sound control, such as improving fan inlet and outlet conditions, and control of exhaust duct discharge area and directionality, will be the topic of my next and final blog post in this series.

In summary, common strategies for reducing mechanical system sound may inadvertently result in higher energy use if part load motor inefficiencies are not avoided during design. A careful design review including sound and efficiency analysis, and specification of balancing for lowest energy use, will help ensure operational cost savings and a successful project.